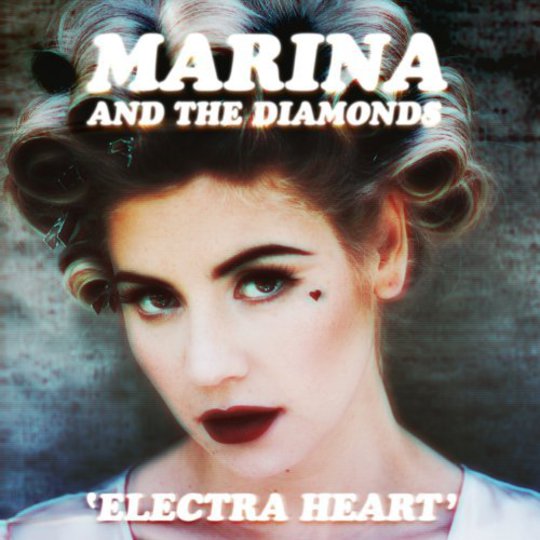 Smart pop, in 2012, is practically the definition of a high-wire act. Rely on the supposedly throwaway nature of the medium too much and you'll float away with nobody caring; try and temper it with too much knowing and smarts and the whole thing comes crashing down. So where does Marina and the Diamonds' Electra Heart, with its alter-egos and concepts a-go-go, find itself in relation to the tightrope?

The headline is: pop concept album about a pop star called Electra. In the world of endless pop ladies, it’s supposedly a meta critique of the industry assembly line's effect on those who step off it. Marina's not exactly disguising her touchstones here; opener 'Bubblegum Bitch' finds Marina-as-Electra snarking about how she's "Ms Sugar Pink Lick-a-lick-a Lips", setting out to demolish the cutesy-pie image of just about every girl who came from the Haus of Disney. Elsewhere 'Homewrecker' kindly points out that all girls are nice until "boys and their toys and their six-inch rockets" come along, as justification for Marina-as-Electra being the titular hussy.

'Fame' in Electra Heart land is represented by what seems like endless cheerleader choruses, set against misery and drowning in their own self-conscious irony. 'Teen Idle' finds Marina-as-Electra wishing that her teen years had been spent as "a prom queen fighting for the title/Instead of being 16 burning up the Bible/Feeling super-super-super suicidal." 'Primadonna's bridge, meanwhile, is peppered with the odd "oooh" and "yeah!" chanted with all the enthusiasm of a bored Dalstonite. Deliberately so. Nothing on this album is anything but entirely studied.

Dressing the album up in concepts means we have to assess it in terms of whether Marina actually hits her targets. The album's central conceit is, ostensibly, the blurring of the line where Marina ends and Electra begins. But that only works if it's made crystal clear that is the goal; Electra Heart does no such thing, making it impossible to fathom whether Marina's invented this alter-ego in order to sympathise with or attack. Predictably, the same confusion of motive goes for that aimed at the artist herself.

Inventing an alter-ego to take all the blame ironically has taken all the sting out of Marina's barbs. Mostly, you don't get to critique what you view as the loss of identity, from a self-proclaimed vantage point up on high, if you've sacrificed your own distinctive traits. For all its flaws, The Family Jewels' big selling point was Marina's self-conscious lunacy. And yodelling. More than that, it knew how to have fun with the snark. Electra Heart, perhaps save for the odd “fuck," could have been made by any of the anonymous pop stars Marina claims to be so against, claims to be critiquing, claims to be so superior to. Maybe I've missed the joke, but it doesn't even feel like there's a joke to get.

Unless the concept is rock-solid, listeners aren't going to want to pick apart Electra Heart in the way it wants to be picked apart, literary vultures circling the discarded carcass of Marina's alter-ego. And if the songs aren't communicating those concepts instantaneously, all but the most ardent pop fans simply aren't going to care. The best pop exists on multiple levels; Electra Heart promises those multiple levels but never makes good. The album doesn’t answer the questions it purports to be posing, or even really make clear what those questions are to begin with. It just doesn't go anywhere, really. More infuriatingly, it doesn't even work as the brainless pop it's supposedly critiquing either.

Electra Heart is a reasonably fun listen, and even if it falls short of its stratospheric ambition, still has more to say than many of Marina's contemporaries. But in failing to meet its own ambition, it feels listless. Weighed down by too much pseudo intellect and, crucially, not enough amazing pop songs, this is one tightrope act that was always going to end more with a whimper than a great flourish.