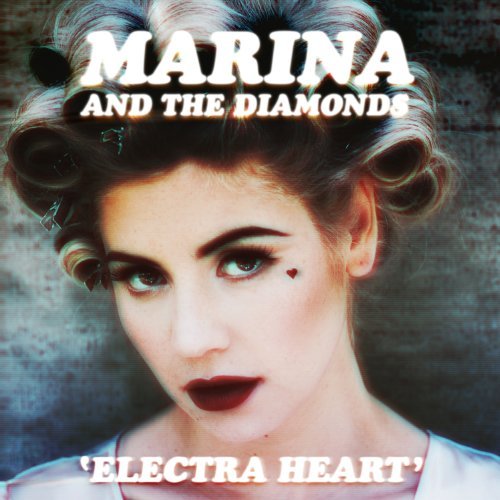 Weighed down by too much pseudo intellect and, crucially, not enough amazing pop songs, this is one tightrope act that was always going to end more with a whimper than a great flourish. »

marina and the diamonds second album, 'electra heart', is not so much a creative leap forward, more an olympian pole-vault over the bar of talented-newcomer into the global amphitheatre of a cultivated classic. two years on from her top 5 debut 'the family jewels', the self-styled avant-garde 'diy artist' has detonated her own experimental past and landed feet first in the future with 'electra heart', a stunningly ambitious, seamless, cohesive and confident sonic pulsar spinning between electro-pop euphoria and come-down melancholia. the album is produced by a cache of old school and a-list producers: dr luke (katy perry) and liam howe (sneaker pimps) but mostly (9 out of 12 songs) greg kurstin (lily allen, kylie) and rick nowels (madonna, stevie nicks, lykke li). a hook-packed stunner with the sonic ambition of a one-woman depeche mode, her onetime theatrical vocals now effortlessly soar between spectral, commanding and towering power-pop, finding her vocal identity in an album about a loss of it. the songs, mostly recorded in la in 2011, were written on-the-road through america in 2010, teased into life on marina's 100 keyboard or sung into her lap-top in the back of her tour-bus bedroom, 'watching the corn fields flying by and making sense of the message that american culture employs; that you can be anyone and do anything, go anywhere and lose yourself- start afresh and forget whatever the truth is'. the song titles tell the story - from throbbing first single 'primadonna' to the robo-pop of 'bubblegum bitch' to the haughty spoken-word soliloquies of 'homewrecker' - a fantasy roll-call of 'fairly vengeful characters'.
description from www.roughtrade.com