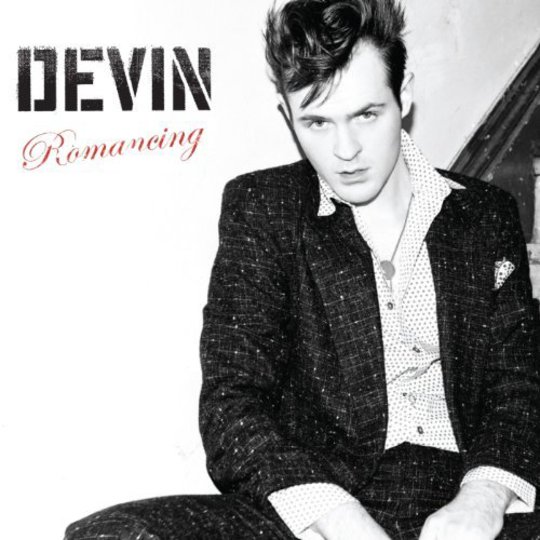 Sometimes it’s nice to have our expectations confounded. After all, who could have foretold that Radiohead’s first post-‘Pop is Dead’ extended release would be the glorious My Iron Lung EP? That Game of Thrones would be a show more akin to The Wire than Lord of the Rings? Or that Robson and Jerome’s Jerome would be such a brilliant badass in it?

Brooklynite Devin does not confound our expectations.

With the confidently monikered singer slouched on the front cover replete with quiff like an aptly monochrome James Dean, his debut album Romancing is one that cannot quite be judged by its cover. Hyperactive power pop punk guitar riffs and soulful blues-tinged vocals are the overwhelming hallmarks of a record that’s rock returned to its pre-counter culture movement days; it’s as if Can, Pink Floyd and Bowie never happened. As the album title suggests, the songs – which include titles such as ‘Born to Cry’ and ‘In My Solitude’ – are all about the time-honoured themes of love, loss, and so forth: “ I say that sleep almost got me feeling like we could win” is straight out of Bruce Springsteen’s songbook. Originality is obviously not Devin’s forte, and a crueller critic than I would be tempted to say that the only thing surprising about this record is its relentless predictability.

To do so though would be to negligently overlook Romancing’s numerous strengths. There’s a sense of Devin not taking himself seriously throughout, but unlike so many Madchester-aping Britpop plagiarist bands that plague today’s festivals and faux-'indie' nights in provincial clubs, he has the talent needed to effortlessly transpose that sense of carefree enjoyment to the audience. His songs are fast-paced, energetic, and easy to dance to, threatening the listener at home with the very real possibility of dance-related embarrassment in their own bedrooms. His vocal is similarly captivating, languid and yet nasal. I can’t tell yet whether he’s a blues singer doing robust pop, or a soulful one tinged with the blues by his lyrics’ emo predilections. Either way, think Billy Corgan on crack, or perhaps Jack White switching his pretentions for gumption.

Although they share a hometown, it’s hard to imagine music more removed from Devin’s than LCD Soundsystem. It was arguably James Murphy and co. who showed the current hipster generation that all the aimless experimenting and originality in the world isn’t a patch on a song that sounds fucking great: here there's the Stonesy punk-pop of ‘Masochist’, ‘New Horrors’ and... well every track may not be quite strong enough to earn the profane underscoring, but the same principle is definitely applied. It’s an unabashed throwback, but it’s a throwback that’s accomplished, likeable, and a lot more fun that it probably should be.