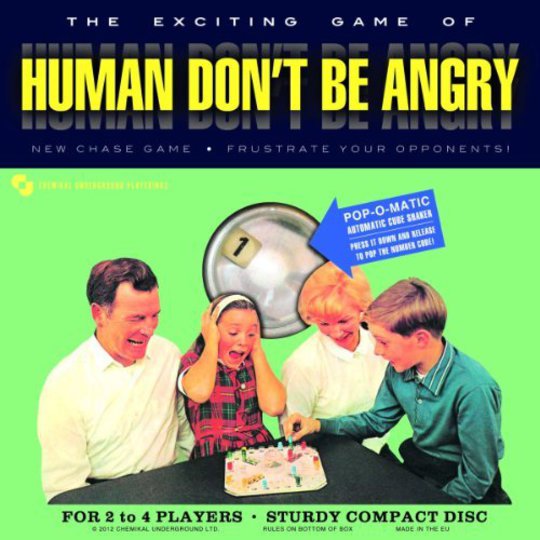 Human Don't Be Angry is the new solo project from Malcolm Middleton, one which circumnavigates his more common interest in black humoured songs in favour of playful experiments removed of vocals but layered with electronic production.

At one point the record was intended to be solely instrumental which shows through instantly with the minimal and gentle electronic opener 'The Missing Plutonium'. It sets the tone for the whole album; fragile in its makeup despite being born in part of man made machinery, largely due to Middleton's ever improving ability to play the instruments he merely dabbled with a decade ago. The computerised effects continue with a detached female voice that delivers singular phrases intermittently on 'HDBA Theme', which would be cold or throwaway were it not for the nuances breaking through from the backing.

Only on the third track does Middleton himself appear, and in a form in keeping with the record's pristine production values. He repeats the same phrase over and over like a public service announcement stuck on loop, with the sentence cleverly changing depending on where the phrase cuts off and restarts. It's elevated further by the subtle echo on his voice and the otherworldly shimmer on the guitar; like much of the record, the production does enough to hint at a detached, robotic world viewed externally but never applied cheaply therefore overpowering the organic tone.

'Monolgue: River' is probably the most typical song here in terms of comparisons to past work, but that's no bad thing; musically it even takes the form of the aforementioned water feature - meandering gently along for much of its duration, it surges to a powerful finale, ending as it began with a light shimmer.

There are further instrumental treats to be had on 'Jaded' and '1985', the latter utilising a strange echoing sound to add texture to the upbeat guitar. The former has the same sense of joy to it, something that juxtaposes nicely with the clinical mix.

'Asklipiio' is the only downbeat song on the record in fact on face value, but there's the same humour underlying it lyrically as in much of Middleton's past work (indeed the name of this new moniker is the German translation of the boardgame Frustration, hence the Aidan Moffat designed artwork). But as the record's highpoint it's an apt end, summarising every trait that makes this new venture so endearing.