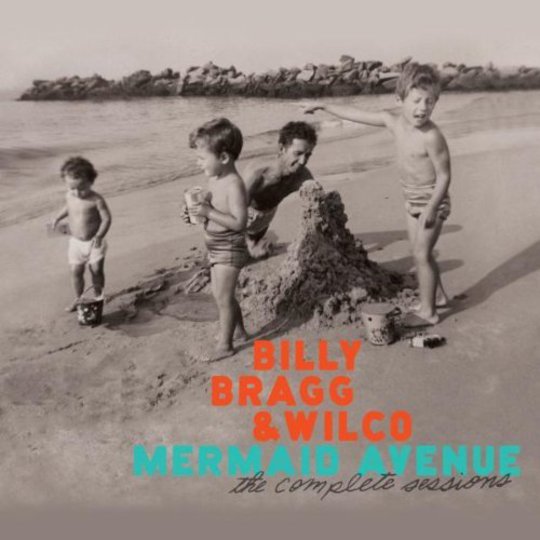 One of the criticisms levelled at the new Sean Penn movie This Must Be The Place is that whilst it captures the quirkiness of small-town America almost perfectly, it fails to comment on it. A fair enough point, and one that reminded me of the wonderful writing of Woody Guthrie, whose lyrics and music take the listener on a road trip through the heart of a fascinating country: Mark Twain set to an acoustic guitar, or a musical Kerouac (just about) on the wagon. In the documentary Man in the Sand Guthrie’s daughter Nora describes him as “Huckleberry Finn, floating past the settled folk on the shore, and very glad to be floating by”, combining the vernacular and the deeply personal with the political commentary that coloured the likes of ‘This Land is Your Land’.

After her father’s death at the young age of 55, Nora Guthrie discovered that he had written over 3,000 lyrics without music. Given Guthrie’s importance in both folk music and American culture it would be almost crass to allow all his work to go undiscovered; after all, he was the voice of the dispossessed, the sunken American Dream, the 'Dust Bowl troubadour', the man who inspired the music and poetry of Bob Dylan . It seems obvious now that Billy Bragg, with his famed beliefs in both liberal ideals and folk revivalism, should set to music the writing of a man whose guitar bore the legend 'This machine kills fascists.' Equally obvious it seems is that the work should be a collaboration with Wilco in their post-Being There guise, riding on the back of one of the finest alt-country Americana record of the Nineties.

The collaboration, which picked up 10,000 Maniacs’ Natalie Merchant and blues/reggae luminary Corey Harris along the way, yielded two volumes of Mermaid Avenue albums, here expanded to three and packaged neatly with the Man in the Sand documentary for Mermaid Avenue: The Complete Sessions. Wilco and Bragg have long been supporters of Record Store Day, and this year being the hundredth anniversary of Guthrie’s birth makes it an apposite time for this wonderful reissue.

For those who haven’t heard the originals, this is as opportune a moment as any to unearth some of the strongest songs in either artist's back catalogue from a pair of albums that tend to merit small mention in discussion of their discographies. ‘Birds and Ships’ showcases Merchant’s voice at its most beautiful, “The wind and sun are in the words you say, where might your lonesome lover be?” sung in a broken falsetto capturing the romance of the American heartland perfectly; ‘Ingrid Bergman’ the lovelorn dream of the stars. The likes of children’s song ‘Hoodoo Voodoo’ and country rocker ‘Airline to Heaven’ are the perfect showcase for American optimism, and the highlight ‘California Stars’ oozes the warmth of a Sonoma pinot noir imbibed under starry west coast skies: “I’d give this world just to dream a dream with you, on a bed of California Stars”.

It’s interesting that Man in the Sand, the standard 'making of' documentary film, follows Bragg on his journey to get to know Guthrie. Whilst this is no surprise, given it was he whom Nora Guthrie approached to work on the project, there’s always a sense that this very English punk is never anything but the proverbial outsider looking in; Bragg comes across as someone observing his hero and his his homeland rather than ever actually getting to know it. This is reflected in the album, where Wilco sound far more at ease, and in a way it’s far more their record than Billy Bragg’s. There’s no denying that ‘Way Over Yonder in the Minor Key’ is a highlight and that Bragg does the song justice, but there’s still something slightly off when he sings “I lived in a town called Okfuskee” in his thick Barking accent. Jeff Tweedy on the other hand owns Guthrie’s lyrics completely, and on the likes of ‘One By One’ you believe lines such as “One by one the words come falling off the page/One by one my dreams are fading in the twilight” could easily be his own.

Recorded in the same sessions, the new material is a similar proposition to Volume II: a deeper introspective into Guthrie the writer and the person of varying quality. ‘Jailcell Blues’, ‘Bugeye Jim’ and ‘When the Roses Bloom Again’ wouldn’t have seemed out of place on the original release, and the heavier folk orientation makes it more suited to Bragg on tracks such as ‘Go Down to the Water’. There are lulls though, and the likes of ‘Gotta Work’ and ‘Ought to be Satisfied Now’ sound like half-finished demos that could have done with more work before seeing a full release.

Even for those who already have both of the previous volumes, Mermaid Avenue: The Complete Sessions is a fascinating look at one of America’s greatest writers. As Nora Guthrie puts it in her liner notes, “Billy and Wilco single-handedly burst through time itself, altering every previous perception anyone ever had about Woody Guthrie; his look, his language, his tone, his rhythm, his purpose, his heart and soul. All of our thoughts about him have now been forever altered in some way.”