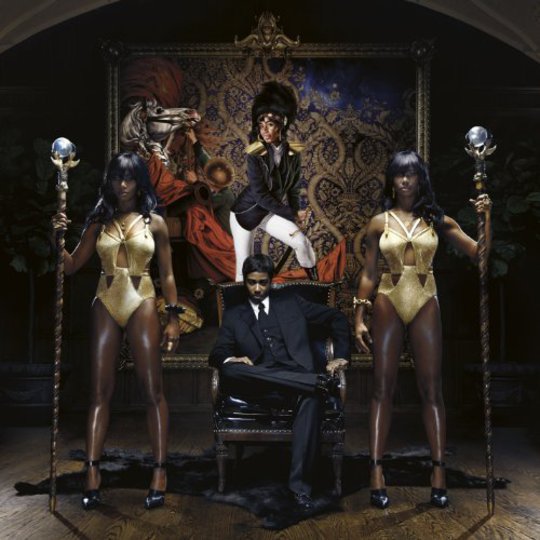 You certainly couldn't accuse Santi White of following the standard path of even the vaguest pop artists. Being asked by her label 'Where are the hits?' while recording Master of My Make-Believe, her response was to actively shun the suggested RedOne, David Guetta and LMFAO and debunk to Jamaica. As we likely all would if we had even the slightest option to escape the shuffling epidemic. The incident, in its own strange way, throws a stark light on Santigold's place on the pop spectrum. LMFAO's music is - depending on your viewpoint - either the pinnacle of brainless stupidity or an irony-laden LOLfest, but either way their focus is firmly on the 'fun'. Master of My Make Believe, meanwhile, is undoubtedly Pop As Serious Business. Very serious business indeed.

'Disparate Youth' is certainly the track with most obvious hit potential, being as repeat-worthy as its surreal video, but to be honest that's not really saying much. With radio being desperate for the next cookie-cutter pop hit, what's evident is the clear effort made not to conform to expectations of either popularity or convention. 'Big Mouth' and 'Fame' are one in the eye for the notion that only by-the-numbers pop has the right to be obscenely catchy, piled to the ceiling with hooks most other artists, pop or not, would willingly sacrifice their glitter for.

Whereas Santogold drew plaudits for its Pixies and Blondie references, and general balls-to-the-wall rock manner, the influence of the Caribbean is all over this album. It’s full of reggae beats and tribal vocal chants on the likes of 'Freak Like Me', paired with distorted vocals conjuring images of neon coastlines. Not to mention the flavour of the ghoulish shaman that permeates tracks like 'This Isn't Our Parade'. On a slightly lighter spooky note, 'Go!' even has a Scooby-Doo keyboard ghost sound effect on it, although thankfully with not a Scrappy in sight. Rock, punk, electronica and indie are still ultimately the name of the game... so, Santigold still utterly defies easy categorisation, as both you and she will no doubt be glad to hear.

There's a problem with Pop As Serious Business though, whatever form it takes, and it's this: it runs the risk of being utterly without joy. And so it is here. There are hooks, and the right influences, and verse-chorus-verse, and demonstrations of technical ability in abundance... as if Santigold possessing the skill was ever in doubt. But Master of My Make Believe has the feel of being made deliberately difficult to listen to; obstructionist for the sake of being obstructionist, confrontational without really having anything to argue against - except what might, ultimately, be self-imposed expectations. The album seems so determined to defy preconceptions - that, for the most part, don't even exist - that listening to it feels like waiting for a fist to emerge from the speakers, Poltergeist-style, and deliver bitchslaps for any thoughts about it that aren’t exactly as intended. It’s prescriptive listening and audience assumptions at its worst, the idea that any response other than Appreciating The Intellect makes the listener an idiot.

While the LMFAO suggestion was clearly daft, it's difficult to understand how it would have ever been meant seriously enough to incur such bile, that group of artists clearly being in a completely different universe to Santigold. By the same token, however, pairing with Diplo and Switch doesn't seem to have created much more than the standard not-quite-MIA fare. When even pop svengali Greg Kurstin is involved and it still sounds like it was a slog to make, the end result is that Master of My Make Believe is just a slog to listen to. And part of me can't help but wonder if that's exactly the self-defeating point.