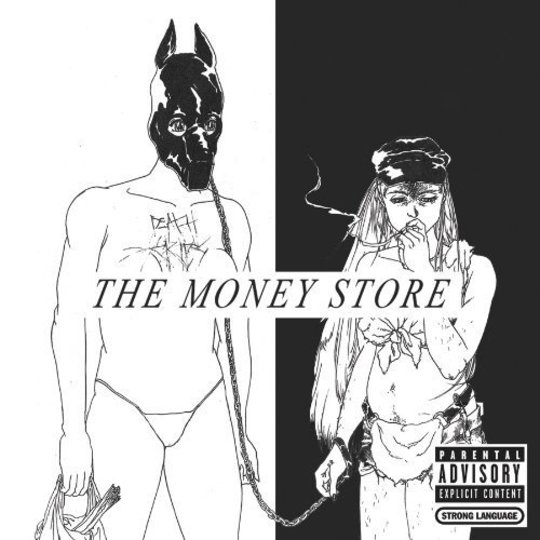 ...Rather better than anticipated, actually. Indeed, Death Grips’ second album, and first of a pair due via the major label machine of Epic before the year is out, is the most intoxicating, invigorating, envelope-pushing long-player of 2012 to date. And while this writer isn’t about to leap to the premature conclusion that it’s the album of 2012, the release schedule for the foreseeable offers little to rival its immense power over the listener. The Money Store can possess iTunes like nothing else, its array of acerbic, confrontational cacophonies both alarming in their aggression and wholly absorbing for their ugly beauty. Death Grips’ music is a car wreck, mangled flesh, a watercolour masterpiece updated Joker style with lurid streaks across its tranquil riverside scene: one simply can’t look – or listen – away.

Much of the Sacramento trio’s first-impression appeal comes courtesy of wiry-limbed, hirsute and heavily tattooed frontman Stefan Burnett, aka MC Ride. It’s his first-take lyrical tumult that rocks these pieces so very singularly; the music about them, courtesy of production duo Zach Hill (he of Hella fame) and Andy Morin, takes certain cues from known sources (although inspiration is drawn from experimental noise circles as much as it is acts previously racked in the hip hop section of your closed-down indie store). That’s not to say it’s not entirely standalone in its approach: again, a metaphor of destroying something once beautiful presents itself, as catchy melodies are subjected to a cavalcade of terrifying buzzes and beats so skull-rattling one wouldn’t be surprised if Death Grips copy-and-pasted them from Kevin Martin’s Bug hard drive. (That the two acts have worked together recently is no surprise.) But echoes of might-be-peers are just that: whispers lost to a violent wind just as soon as they manifest.

A certain accessibility less evident in their freely distributed debut album-cum-mixtape Exmilitary is present on The Money Store, but one’s acknowledgment of this ‘pop’ nous, in the very loosest sense, is subject to prior experience of Death Grips’ M.O.; to the uninitiated, words like 'chaotic' and 'racket' may still pop promptly to mind. But those au fait with the uncompromising output of the group until now will note the dazzling light streaming through their typical canvas of unrelenting darkness on cuts like ‘I’ve Seen Footage’ and ‘Hacker’. The former takes Salt-n-Pepa’s ‘Push It’, deconstructs its DNA and reassembles the gloop and mush into a biomechanical weapon with acid for blood. The latter, this set’s incredible climax, sounds like something the RZA might’ve come up with if he’d spent a vacation in Chernobyl with These New Puritans on repeat while consuming transgressional fiction like candy floss. It’s ‘Hacker’ that most brilliantly hints at genuine crossover in the future for this project; its cascade of heard-as non sequiturs – certainly, lines like “now we got all the coconuts, bitch” seem lost in the leftfield if stripped of yet-to-be-comprehended context – entertaining in their he-said-what contrast to the more explicitly phrased content elsewhere, but Burnett’s energy drives them into the grey matter with the subtlety of a stake to the heart.

And it’s the energy of Death Grips that makes them so very important in 2012 – no other group is doing this, with this level of palpable commitment, on a stage backed by major label money. Anyone fearing that Epic would get their pH balancing boffs to sooth the corrosive sides of this outfit’s fare should cast aside such doubts – The Money Store was mostly completed ahead of their deal being confirmed, and the powers that be at the label have been most accommodating of Death Grips’ attitude to servicing their material (note the large number of tracks available to hear online ahead of this collection’s official release date). Whatever the meaning behind the menace of Burnett’s coalface performances, what rings loudest once the record’s stopped spinning is just how powerfully passionate Death Grips are. Anger is an energy, some old punk once said; but it’s never quite been articulated like this, with negativity turned on its head and thrown at an audience as something to embrace. From the sci-fi dub sounds of ‘The Cage’ to the beating-M.I.A.-at-her-own-sort-of-eastern-sounds game that is ‘Punk Weight’, via the dälek-at-double-speed screams of ‘System Blower’, The Money Store thrills like no other set heard this year.

Furthermore, this feels like a genuine game-changer: in terms of what is and isn’t a ‘major label’ release, what really comprises commercial viability in the disseminated online era, and just how stretched a pigeonhole can become before it becomes irrelevant. This isn’t really a rap record, and it’s certainly not a rock affair. It’s not an industrial set, and few high-profile DJs are about to slip its tracks into their dancefloor programmes. It is a Death Grips record, simple as; a completely successful experiment in isolating artistry from external pressures to produce an artefact that will inform pioneers-to-come.

Aww, fuck it… album of the year, in this house at least. Get yourself in a chokehold and enjoy the Ride.