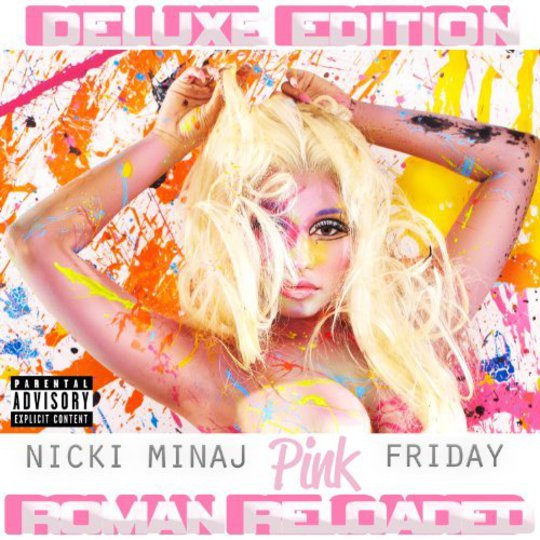 It is not enough to just like Nicki Minaj, you have to pick sides as well. Minaj’s fanbase has its own spectrum of pop ideologies: at one extreme are the hip-hop fanatics that speak of the glorious mixtape heydays; at the other pop conservatives staunchly defending her club hits; and cowering somewhere in between are those that like her R&B jams. That’s not really true of course, there are no summits where fractions of her supporters meet to try and work things out. But even so, it seems like we’re stuck in a stalemate when it comes to Minaj, tirelessly rehearsing arguments about these schisms. Not even she is taking the distinctions all that seriously: “Nicki, Pop! Only thing that’s pop is my endorsement ops”.

Can we talk about Minaj’s Grammy Award’s performance for a second? It takes the opening track of Pink Friday: Roman Reloaded, ‘Roman Holiday’, and dramatizes it into a ridiculous, badly acted, rap-opera re-enactment of that Exorcist scene. Obviously the whole thing was, with its breakdancing clergy and levitating Roman Zolanski (her 'twin brother', keep up), not quite as weird as it wanted to be but undeniably fun. That is exactly what the first few tracks on Pink Friday: Roman Reloaded are. Even if the alter egos of the Zolanski family (the Limey mother, younger sister and prodigal son Roman) are becoming less and less characters and more an excuse for weird vocal inflections and an occasional change of pitch, they are still a joy to hear.

For an international chart-topping album to open with possessed carol singing (“Oh come oh ye faithful / joyful and triumphant / I am Roman Zolan-sk-i”) is quite something. Even more unexpected is the line on the following track ‘Come on a Cone’. In an epiphany of sorts, Minaj cuts the music and, like an X Factor audition try hard, wails “Put my dick in your faceee ye-e-yeah”. Other than these few tracks, there is barely enough of Mr Zolanski to merit the album’s subtitle. Which is shame as a half-Russian, closet homosexual man, with an oppressive homophobic mother is about an interesting choice of rap persona as they get. It certainly raises more gender and sexuality issues than a single review could tackle. Thankfully even when the ‘character’ is dropped, Minaj, mostly, doesn’t let up: taunting opponents (more often then not Lil’ Kim) to the Juke beat of ‘Stupid Hoe’ and tearing up the road with the battle cry of ‘HOV Lane’.

With the array of producers on Pink Friday: Roman Reloaded, the backing instrumentals have a multiple personal disorder of their own. It’s an odd mix of sparse, radar blips (‘Beez In The Trap’), gunshots and snares (‘Roman Reloaded’), Euro pop (‘Starships’) and trashy electro (‘Pound The Alarm’). Minaj has always been about dressing-up, much like the Barbie doll that she has adopted as her icon, and here she dons almost every musical style of contemporary pop that there is. Surprisingly this works, but only with songs are as eccentric and excessive as Minaj. So when ‘Pound the Alarm’ commands you in its over-the-top robo-female voice to do as the song title asks, you almost feel obliged to comply. ‘Starships’ is the successor to ‘Superbass’ but somehow with even more sugar. Perhaps the only exception to this rule is ‘Champion’, a slow burner dedicated to a lost nephew and single mothers, the only convincing heartfelt moment on the album.

Those songs that don’t succeed don’t really have Nicki Minaj in mind. ‘Whip It’ is like a pastiche of Rhianna with all the faux S&M, euphemisms way past being subtle, and even trademark “na na na"s. On a similar note, ‘Sex in the Lounge’ is beyond awful, as well as being the most uninteresting and timid choice of location for intercourse in the whole history of RnB sex songs. Worst yet are the dreary ‘serious’ numbers like ‘Young Forever’ and ‘Marilyn Monroe’. ‘Automatic’ – about a Nicki-bot that malfunctions and dances out of her control – will make you wish someone would find her darn reset button.

Pink Friday: Roman’s Revenge begins with Mrs Zolanski ordering “Take your medication Roman, you need to know your station Roman, some alterations on your clothes and your brain”. Are we meant to read this as an allegory for Minaj herself, placed in straightjacket and denied artistic control? It’s obvious from the more absurd moments of Pink Friday: Roman’s Revenge that Minaj doesn’t fit that clichéd narrative. She does as she pleases, and she could have defined herself by her weirdness, but chooses instead to experiment with a number of other pop (excuse the wanky term) tropes. Pink Friday: Roman’s Revenge isn’t bad because of Minaj’s cross-dressing it is bad because she often tries on some very banal, characterless outfits.