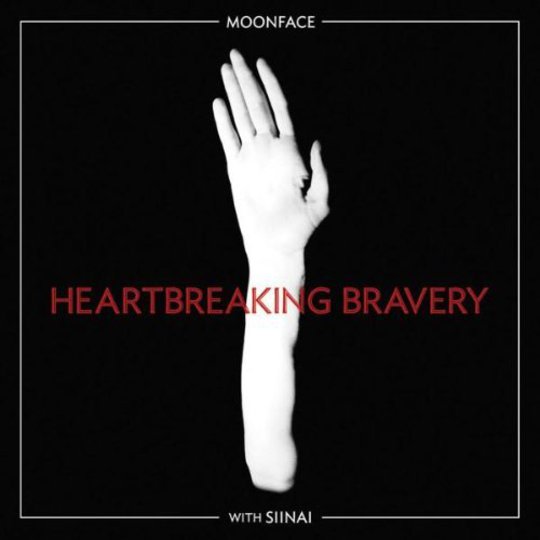 In a somewhat ambiguous self-penned 2011 press release , Spencer Krug either called time on Sunset Rubdown or maybe just let people know that he’d personally be going under the name Moonface from now on. ‘Moonface is not a band, just plain half-old me, in any solo or collaborative projects I'm involved in from now until whenever,’ quoth he.

The bad news for folks hoping for a new Sunset Rubdown album anytime soon is that With Siinai: Heartbreaking Bravery’s ungainly title really does suggest Krug is in earnest about only now releasing under the Moonface moniker. A team up with Finnish post-rockers Siinai (who wrote the bulk of the music, with Krug adding vocals, lyrics and some keyboards), it has almost nothing in common with Moonface’s pointedly solo two previous releases, the excellent Dreamland EP and the slightly all over the shop album Organ Music Not Vibraphone Like I’d Hoped.

It’s also been billed as Moonface’s debut album, which is immensely confusing (his PR suggested to me that the 40-minute Organ Music… was now being viewed as more of an EP), but I suppose whereas the old Krug would have simply decreed the Siinai hook up to be a new band called Duck Fighter or something, now everything has to be Moonface. Maybe the next album will be the debut as well.

Aaaaaanyway, as alluded to earlier, With Siinai: Heartbreaking Bravery is an about turn from the explicitly solo approach of the first couple of Moonface projects, wherein Krug played everything himself, with a restricted musical palette and autistically literal titles (as well as Organ Music…, the sole song on Dreamland was called ‘Marimba & Shit Drums’). Here Krug made his contributions in response to Siinai, an approach that serves to both liberate him from the rigorous aesthetic ghettoes he’d previously confined Moonface to, and also make for a harder, harsher record than the nerdy indie synth fare that’s been the bread and butter of most of his other projects.

Certainly stuff like the brooding album highlight ‘Faraway Lightning’ sound nothing like Krug has been involved with before, its coldly exotic peals of synth and measured, menacing floor toms distinctly reminiscent of Closer-era Joy Division. Likewise ‘I’m Not the Phoenix Yet’ is wonderfully abrasive, constructed of little more than ascending howls of feedback and what sounds like somebody beating the shit out of a wood block. Not everything Sinnai toss Krug fits together all that well with everything else on the record – the first four songs practically sound like they were made by different bands – but the fact it’s not the smooth ride of Dragonslayer or the overly placid Organ Music counts in the favour of a jaggedly atmospheric record that flushes out some of its co-creator’s more familiar mannerisms.

Trying to square the songs with each other also presents Krug the musician with a challenge that he rises to with some very natty keyboard work. ‘Yesterday’s Fire’ might sounds like it was half-heartedly scuffed up in production after it turned out sounding too much like SunRub, but its ravey outro and segue into the lo-fi electro sweep of ‘Shitty City’ is a thing of drizzly wonder.

So it’s a good record, settling down a little (but not too much) after its mercurial first half into a gothy, grandiose, new wave indebted thing that breathes a good measure of dark vitality into the Moonface project.

That all accepted, the idea that stepping outside of your comfort zone is always a great idea is a patently untrue cliché. As a musician, Krug would seem to gel well with Siinai (I am lazily crediting him with the lion’s share of the keyboard work here, which probably is totally unfair to the Finns, but whatever it is he’s doing works with whatever it is they’re doing). As a singer I’m not so sure: his cerebral croak is certainly an interesting contrast to its abrasive surrounds and there are some moments when it all falls together, as in his harsh, urgent delivery on ‘Teary Eyes and Bloody Lips’ (“…make you look like Stevie Nicks”). But in writing reactively to Siinai the rich poetry and earworm melodies of Sunset Rubdown and Wolf Parade are somewhat lost in the dissonance, while a more commanding voice would perhaps better stand up to the music.

All in all, With Siinai: Heartbreaking Bravery has the air of a project to it rather than a vital artistic pursuit. But projects are often worthwhile, and certainly this is an engaging collection that offers exposure for Siinai and a kick up the arse for Moonface. Why we can’t just have another Sunset Rubdown record I am not sure, but it’s Spencer Krug’s prerogative to do whatever he pleases, and as unexpected career diversions go, this is a good ‘un.