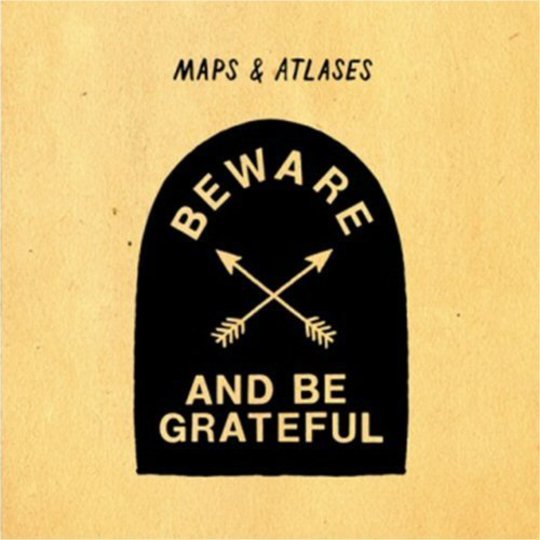 Here’s a cold, hard fact: musicians don’t get points for effort. If that was the case, Battles would be bigger than Oasis ever were, Chinese Democracy would have been frickin’ amazing and the charts would be dominated, not by singers who made it through a few rounds of a TV talent show, but by bands who’ve, say, written some songs and played some gigs. If we lived in that world, this would be a very different article, because Maps & Atlases have clearly spent countless hours sweating over samplers and effects boards to make this, their second album. And in an ideal world they’d be given credit for the time they’ve spent and the energy they’ve exerted making Beware And Be Grateful, but here’s another cold, hard fact: it’s just not that enjoyable a listen.

You can put on Beware And Be Grateful and as you listen to opening track ‘Old & Grey’ you’ll be thinking, 'Yes, those multi-tracked vocals have been awfully intricately interwoven, and those percussive samples have been remarkably precisely timed, and that clanging piano in the coda comes as quite a surprise'. But for all that the track will make you think on the first listen (and maybe on the second, but not the third) it will make you feel very little, and that’s true of the whole record.

Maps & Atlases have a diverse array of textures and timbres at their disposal, but instead of creating a colourful new universe of sound for you to get lost in, you find yourself wondering what function each of these components is supposed to serve. The bobbing synth pattern on ‘Fever’, for example, sounds like it’s trying to make you jump up and down with joy, but the rhythm section sounds so flat it’s hard to find the energy. There’s also something about the skittering funk of ‘Be Three Years Old’ that wants to get you grooving, but in trying to emulate Talking Heads' fusion of complexity and danceability, they’ve made a disco track with a beat that’s impossible to find.

There are unfortunate flirtations with a number of global styles on Beware And Be Grateful. The flickering Spanish guitar of ‘Bugs’ is perhaps the least irritating example, but it still says 'holiday resort house band' more than it says 'genre-hopping musical pioneers'. ‘Silver Self’ is the worst offender, with five solid minutes of the same unpleasantly squelching tropical synth. The more straight-forward rock songs are disappointing too, with ‘Vampires’ sounding like the sort song a naff dad would drive around listening to during his midlife crisis, and ‘Winter’ simply sounding like Maroon 5 without even the wholesome enthusiasm.

The soulful, mournful pacing of closing track ‘Important’ at least shows some depth, though its intensity and atmosphere are somewhat undermined by David Davidson’s elaborately gooey vocals. And so despite all the kooky, twee melodies that make up Beware And Be Grateful, despite the glossy production and multitudinous fragments of ideas that feature on it, even despite the fact that it’s hard to think of another band that Maps & Atlases particularly sound like (maybe Grizzly Bear, a bit), this album fails the ultimate test – it’s no fun. There’s undoubtedly some clever stuff going on under its surface, but when it makes you feel nothing you have to wonder, what’s the point?