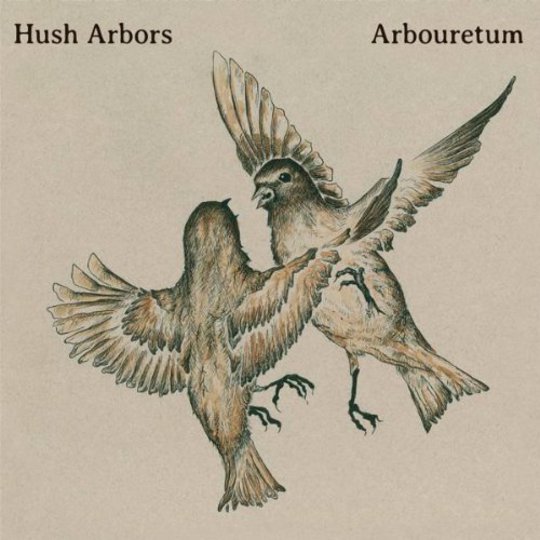 There are many reasons to be cheerful, despite the impending collapse of the European economy (no, they’ve not sort it yet) and the existence of Ed Sheeran. The emergence of a whole flock of US bands re-imagining the last throes of the Sixties/early Seventies explosion of cosmic American folk rock in the manner of CSNY and The Band is entirely one of them.

Rejoice! then for Aureola, the new joint LP from Hush Arbors and Arbouretum on Thrill Jockey, the label that appropriately enough brought you the epic Wooden Shijps and the drifting Americana of Barn Owl.

Hush Abors is the stage name of Keith Wood - a San Franciscan folksy troubadour who has been noodling away at the edges of the west coast psychedelia sound for the best part of a decade with his solo output as well as playing in Thurston Moore’s touring band, Six Organs of Admittance and several others.

His soft, unintrusive and plaintive folk rock is captivating yet largely uneventful - a mixture of sunny Byrdsian bounce and doomy Youngesque acoustic dirge, all sung in a thin, distant falsetto. The lo-fi production does little to alleviate the pedestrian pace of songs like ‘Prayer of Forgetfulness’ - a regulation three-chord rock by numbers affair. ‘Up Yr Coast’ is better - straight from the Doom Trilogy-era Neil Young songbook, its charming simplicity and amiable hippie throwback nostalgia is only pierced by a few bars of fierce guitar attack.

The spooky ballad 'The Sleeper' most effectively invokes the burnt-out paranoia of the Laurel Canyon singer-songwriter schtick and shows what Wood is capable of better form.

But the Hush Arbors side of the LP never manages to hurt into life. Things get really interesting on side two when Arbouretum plug in and wig out with their robust, epic psychedelic noise, which makes it all the more frustrating that they only get three tracks.

“Ever since I can remember I have been a stranger here / and the landscapes of delusion, where the certain spend their years in an outbreak of the insane” sings Heumann, though the effect is heavy in the Spinal Tap sense (i.e. good) without being overly weighty.

You can perfectly sing Neil Young’s ‘Come On Baby Let’s Go Downtown’ over the main refrain of uptempo rocker and album closer St. Anthony’s Fire, but it’s not less fun for that - not least for the presence of an extended ebullient fuzztastic solo right in the middle that Neil himself would be happy with.

So a game of two halves, with enough excitement from Arbouretum to keep it interesting - but cosmic Americana fans may find more solace in their (excellent) previous two records The Gathering and Song of the Pearl than they will here.