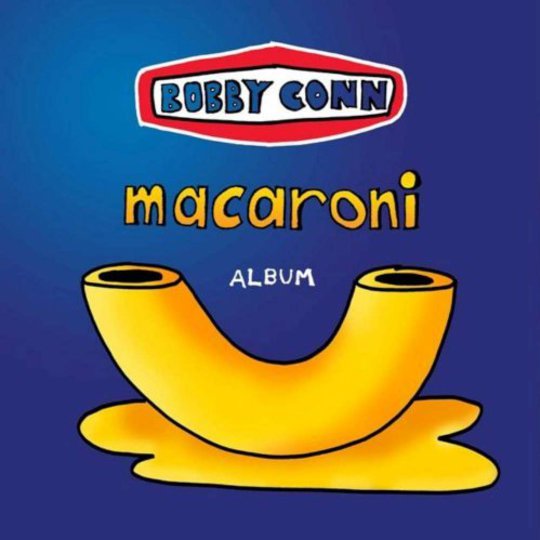 Bobby Conn has been playing pick 'n' mix with genres and delivering messages of politics, hope, despair, revolution and bullshit in his quasi-falsetto since the early Nineties. All this whilst dressed in glitter, eyeliner and high heels that would these days rival Nicky Wire.

Macaroni continues this delightful life’s work with Bobby’s usual panache and evangelical revolutionary fervour. The title refers to those cheesy processed noodles – comfort food for the failed. As Bobby sings emphatically on the glam rock title track, “It’s OK”. Of course, like much of Bobby’s words this is rather tongue in cheek. Nothing is OK, there’s war, inequality and greed everywhere and you’d be a dumb ass liberal to ignore it. Oh yeah, and it sounds like he’s singing to a member of the ruling class having a breakdown: “ Watch your lover walk out the door/She tells you she can’t take it no more …you can’t make decisions if it threatens your position/So you eat another bowl of noodles, waste another day”.

The idea that macaroni can make everything is ok is a joke. “We went to war shed by comedians/So don’t confuse us with the facts” attests Bobby on ‘Govt’, a political jam which begins with a string section and grows into a sprawling funk song with echoes of Edwin Starr’s ‘War’. Kelly Hogan and Nora O’Connor’s guest soul vocals on the track are irresistible and engross you in the world’s radical possibilities “by the people/by the people/for the people” whilst Bobby sings furiously about the military industrial complex and other shit things: “government prisons government cops…government borders, government walls, but nobody knows what the government knows”.

The vocoder on ‘Face Blind’ feels a bit much at first, but in the context of an album which blends glam rock, funk, disco, electro and pop pretty effortlessly and without sounding like it’s been made by a totally pretentious wanker it starts to make sense after a while. The despair and loneliness is palpable in the lyrics: it’s a narrative of alienation bought on by living in a world that gives you fuck all, told from the point of view of a despairing lover who has lost everything, singing hopelessly to his ex: “call the police to get me, beat me, lock me up, forget me”.

‘More Than You Need’ sounds like the reprise of a musical and who can resist that? Bobby delivers the resigned chorus lines “I know that you’ve been waiting you’re whole life for someone to believe in/I hate to let you know there’s no one”. He may be right, perhaps there is no one to believe in. And whilst the political analysis in Bobby Conn’s songs is spot on, I imagine he’d be the first one to admit he’s guilty – as most of us are - of many of the same western hypocrisies he exposes. But that doesn’t mean you can’t love his music. It’ll comfort you like a bowl of processed macaroni and then mock you for sleeping so soundlessly at night whilst your government continues to murder thousands so that you might live in luxury and ignorance, your response being that you “signed petitions/made a sign…gave my spare change to beggars”. Comforting, unsettling, danceable; one way or another Macaroni is a record to make you sweat.