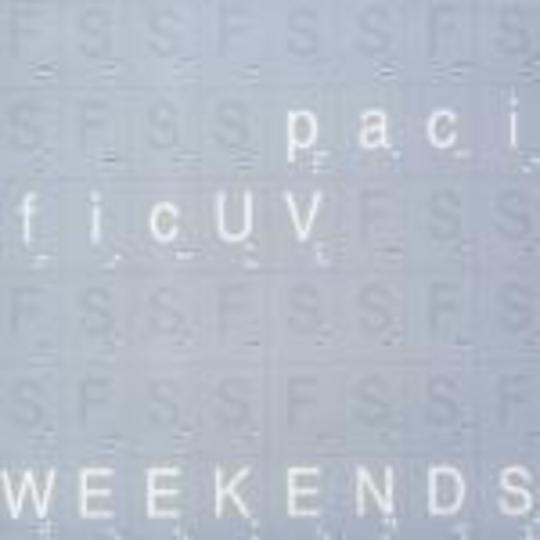 Approaching their fifteenth year of existence they may be, yet PacificUV remain a curious anomaly. Formed through a shared love of The Jesus And Mary Chain and hallucinogenic drugs at the tail end of the Nineties, these days PacificUV are likely to be found in the Athens, Georgia having initially started out there before spending the best part of a decade in Portland; their profile has kept a consistently low level despite 2002's self-titled debut being heralded by some as a masterpiece.

Perhaps more notable is the band's musical development over the course of their career. If PacificUV was the sound of a band sticking to its shoegaze roots while embracing the traditional post-rock formula (fast/slow, quiet/loud - you know the drill...), then 2008's follow-up Longplay 2 heralded the arrival of a more electronic element to their make up.

Not exactly prolific, then. With their first two records having taken four and three years to make respectively, the current line-up of PacificUV - only one original member, guitarist-cum-singer Clay Jordan - have once again taken their time. Having started work on Weekends in 2009, it's to their credit that they've ultimately delivered arguably their finest record to date. Embracing a similar air of dry, sardonic chamber pop that people like The Magnetic Fields or The Postal Service have conveyed so gracefully over the years, the 12 pieces that Weekends is comprised of take the form of a single concept; the disintegration of a relationship.

Featuring guest contributions from Of Montreal's B.P. Helium, John Fernandez from The Olivia Tremor Control and one-time Gnarls Barkley collaborator Heather McIntosh among others, Weekends depicts an atmospheric mix of emotions from start to finish. Self-produced by the band's bass player and all round multi-instrumentalist Suny Lyons, it's a heady concoction of spacious ambience and wistful melancholia.

While the ninety-second introductory piece 'Friday Night Dream' sets the scene admirably, all lush chord sequences and submarine deep bass, it only tells half the story. The casio tinged pop of 'Funny Girl' coupled with the dreamy lullaby that is 'Baby Blue' - B.P. Helium's guitar cameo omnipresent throughout - represent a more diversified outlook than either of Weekends' predecessors. 'Just4kix' meanwhile occupies the same ballpark as Fuxa or Spacemen 3 in their final Recurring phase, all psychedelic electronica and haunting layered vocal effects, Jordan imploring "My sweet love, please don't go".

At times just as likely to embrace cataclysmic slabs of dub as dreamy ambient soundscapes, 'I'm Here (But It's Not Me)' in particular causes several speakers to tremor in its wake. Soulful and robotic in equal measures, the vocoder driven 'Ballerina' and funereal tangs of 'High' proffer ideas from the likes of M83 and Death Cab For Cutie whilst channeling them in a most unique manner. 'Be My Only Shallow Love', arguably the standout moment on a record where standards rarely falter. 'Going Home' takes its influence from Spiritualized's more pronounced recordings, its slow build up cascading into a celebratory fanfare by the time Jordan and co. reach its coda three-and-a-bit minutes in.

Overall, Weekends is an inspired assortment of astutely executed ideas packed into 12 flowing pieces that deserves a wider audience than its likely to receive. Underrated yet in no way understated, PacificUV can be proud of their achievements, not least because they've created a better record than many of the peers that inspired it have managed in recent years.