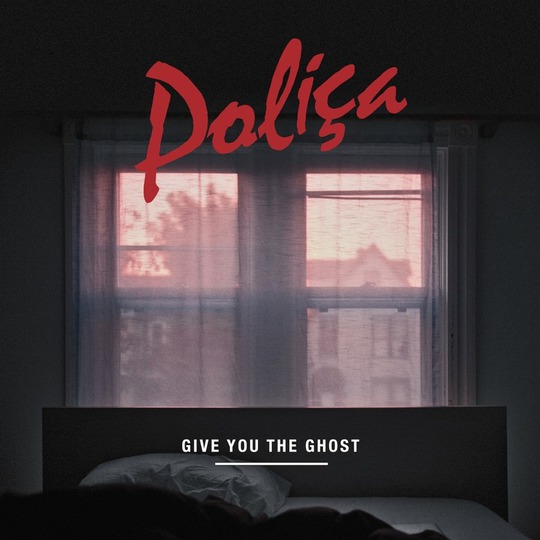 Enter Poliça, slinking in from stage left. Six months ago their name barely registered on Google (unless you were looking for an Italian policeman) but The Blog Machine and ageing respect-mah-authority Rock Writers have been knocked for six by tracks from Give You The Ghost - some even going as far as naming them The Band of SXSW™. Driving all of this <3-ing is ‘Lay Your Cards Out’, an oblique pop ditty that starts off pirouetting in space, and as it begins to hurtle out the spaceship doors - whilst seeming motionless - the whole song soars and skitters along the crest of a double-drumming wave.

You can’t go wrong with any band that has two drummers, really, and the pair of tub-thumpers give the album this contrary feeling that it must be sophisticated software powering the impossible beats (especially as opener ‘Amongster’ crescendos like the twin towers falling on top of you), but the fact they’re real drums provides a distinctly human edge. And by edge, what I really mean is that at times the kick drums have this classy skate punk pace and the snares make me want to form a robot military band. In fact, the rhythm section is part of the reason why this record is required listening for anyone who cares about the state of ‘indie’/’alt music’ in 2012, because rather than quickly becoming a dreary 'LOOK what I did in my bedroom!!!!1' record of the sort of dorm-wave that has been clogging up unpopular music for quite some time, Give You The Ghost is a breath of the freshest air, gusting at you from all directions but never demanding you pay attention (it’s a bit like a cat in that respect). In fact, rather than being another unremarkable use of influences and modern technology, much of Poliça’s sound feels like a battle between human and machine, swanning around in that place where the human race completes its synthesis with technology, seemingly fearing or perhaps poking a bit of fun at the idea of the singularity. This ‘what is real’ feel seeps from every rimshot and it’s especially there with the most exceptional part of this record: The Vocals.

Channy Cassell (yes, she was in Gayngs, and yes this is a heart-break record, written in the aftermath of her divorce, which would be remiss of any press release reading reviewer to omit) is what takes this record to places few manage to reach. Her voice hangs in the air, slightly obscured, swimming within a rainbow of modulated effects that are part auto-tune (yeah, you could insert a mention of Kanye’s 808s, here, and an obligatory 'don’t worry, it doesn’t sound like Cher' remark, here), part otherworldly Cocteau Twin using an alien voice changer. Rather than sounding like a novelty sci-fi affectation or some Ellie Goulding-esque deformity, this distortion adds a layer of obstruction to understanding the words, and in doing so it coaxes your nearer, forcing you to pay full attention and become fully immersed... Tune in to the zoned out... Weirdly, Cassell has claimed in some interviews that her vocals aren’t a crucial part or the main focus of the music and that she purposely sings in a way that is restrained and distant, allowing her voice to become more like an instrument. For me her voice adds all of the colour and suss and is at the very heart of the music. It's the interpretation of a human voice that elevates this record beyond a curious obscurist record and makes the simmering (but never boiling over) electronica truly shimmer.

Sure, sure, you could denounce Give You The Ghost for its seemingly uber-hipster credentials, and slate it for being just another derivative detour to a land of post-Knife, post-Animal Collective, post-LCD, post-Daft Punk, post-Talking Heads, post-Kate Bush, post-Bowie, post-Roxy Music, post-Velvet Underground, post-[insert obscure prog-disco band obsessed with space travel] 'band', weaned on TLC, Aaliyah and Madonna. Yes, you could be put off by the perfect storm of hype, by Justin from Bon Iver being verbose about them, Jay-Z championing them, by the un-ending blog-love, broadsheet love, music mag love, decent-radio-station love or by the gyrating rhythms that at times seem to be shorn from the same Euro-disco anthems that Gaga adores (especially on the ‘All That She Wants’-ish track ‘Form’). Trace the faint outlines of inspiration all you like but there's something happenin' here and I'm not totally sure what it is but it's exciting, intoxicating and unique, and has me wondering if people will be writing post-Poliça before the year is out...

Of course, you could give this a cursory listen and dismiss it and them, as I did at first, as just some sort of dress-up box hipster band, playing with the magic of their influences and the cold chrome textures of Matthew Dear, trussed up in the woozy whirl of post-r'n'b. Or you could stop a minute, turn your headphones right-right up, shut them eyes, and then try to deny your inner air drummer. Soon you’ll be telling people that ‘honey drips from every crevice of this record’ and you might find yourself uploading your own fan videos using half-inched scenes from nature documentaries that you’ve cut rapidly but gracefully from widescreen scenes in fast forward to slo-mo close-ups. Or maybe you’ll just shoot a vid on your iPhone using a special antique filter of a Slinky slowly bouncing down some steps, synchronized perfectly to the beat. You’ll soon start referring to this as 'undeniably brilliant' and describing it as being “like Fever Ray at the discotheque.” You may find yourself talking about the 'trickling drums' to your friends, explaining that they're part of the start of some luscious revolution. You won’t know yourself, and you won’t care about The Old Folks or the hip Young Folks or originality or The Zeitgeist, but you might will end up slow-dancing to these 'slow-jams', and for that, you need not apologise.