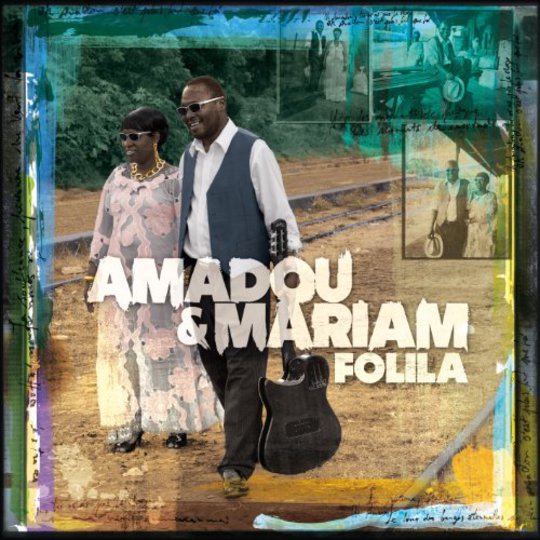 How do you solve a problem like Amadou & Mariam?

There are two ways to get this smattering of talent on your album. One involves mild deceit, and the implication that you are making a charity record, not unlike Band Aid. A&M have wisely chosen the alternative and less fraudulent approach of hard work, spending years on the circuit before becoming a (Guardian reading) household name. This brings me back to the original problem facing A&M which I subtly hinted at earlier, and was in no way included merely to shoehorn in a weak reference to The Sound Of Music.

The elephant in the room is... World Music.

Two seemingly harmless words that when merged together form one genre that conveniently encompasses nearly every musical venture that doesn’t originate from Europe, North America, Jamaica or the English speaking regions of Oceania.

Not that lazy genre classification is the worst problem in the world - certainly not when compared with the unrest currently sweeping across the pair's home country. Yet when you hear the story behind the album, finally shirking off the dreaded affiliations with World Music was surely a partial motivation behind Folila.

Originally it was intended to be two separate pieces of work: one with African guests, one with their more recognisable musical friends. On completion the couple instead opted to piece both projects together, creating a calling card that exemplifies the traditional, accessible and exploratory nature of the group.

You’d be forgiven for fearing a clunky, schizophrenic songbook of duets crudely patched together to cash in. Thankfully Folila is definitely an Amadou & Mariam record. It feels organic. Heck, if it wasn’t for the fact that it was written on the album sleeve I’d probably be unaware that any of these collaborations took place. No showboating, just pure assimilation. Sure, you can recognise something of TV On The Radio on ‘Wily Kataso’, but what is clearer is both acts penchant for building a quality record on a mean rhythm.

‘Wari’ exemplifies the bluesy roots and inventive guitar playing so often associated with the duo, where the language barrier is no obstacle to the strained emotion conveyed by the lead vocal. There are dark lyrical themes here, but there is an abundance of warmth too. ‘C’est Pas Facile Pour Les Aigles’ is positively bristling with positivity, possessing a vibrancy that erupts from the speakers. At the end of album closer ‘Chérie’ – one of many songs dominated by Mariam’s cheerful magnetism - when the non-mawkish children’s choir break into relaxed laughter, you are offered a window into the joyful environment that helped create and cohere this ambitious songbook.

Due to the constraints of time and fashion I’d guess that a lot of people (not excluding myself) rest on the crutch of familiar assumptions and quickly pass on the chance to even briefly listen to a West African blues act. There is sometimes even a suspicion lingering behind the reality that if it wasn’t for musical explorers and lovers like Peter Gabriel and Damon Albarn maybe they wouldn’t have had the chance to make this record. Such people are stupid. I wasn’t sure what to expect, but it turns out that I really like Folila. If you are willing to be patient it offers more surprises than you’d expect, flourishing on repeated plays.