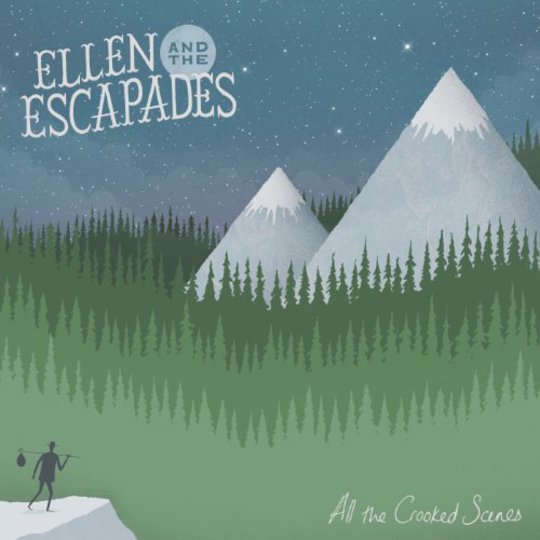 Even since winning Glastonbury’s Emerging Talent competition in 2010, Leeds five-piece Ellen and the Escapades have grabbed a healthy amount of attention, most notably from the BBC. The five-piece, who first met as students, have since gone on to support Josh T Pearson and First Aid Kit.

Yet the sound that’s been so highly praised lies much further afield. Their oaky style fits less with the cold, urban surroundings of their native Yorkshire and more with the vast North American plains: the grandness of ‘Run’ stopping at a crossroads between Kathleen Edwards’ Voyageur and First Aid Kit’s The Lion’s Roar. Further on, the bullet sharp twang of the LP’s title track pierces at a horses pace fit for a spaghetti western whilst 'Without You’ recalls Conor Oberst being covered by Sheryl Crow (it’s actually better than it sounds).

All the Crooked Scenes often returns to folk’s tried and tested themes of love and loss which is where it’s most stirring moments lie. On the Bon Iver type crackles of ‘I’ll Keep You Warm,’ vocalist Ellen Smith longs for loving companionship as she coos: “You want to know how fast the feeling grow / Never felt so cold / I’ll keep you warm.”

“So I tried to follow you out but they followed you down into the sea bed,” she calls as she dives into instrumentation as grand as the track’s sea-bound imagery. On ‘Yours to Keep,’ she’s had enough of being messed about as she cries: “I’m sick and tired of being uninspired and all I need is some kind of guarantee,” simultaneously summoning the spirits of Elliot Smith and Jeff Buckley. Her gorgeous, coarse voice is key to the album's character, yet eponymous though the band is she doesn’t impose so much that she threatens to turn the band into a Florence and the Machine/Marina and the Diamond’s type act.

Given such imagery, it’s hardly surprising that the production is just as grand. The mid-paced trot of ‘This Ace I’ve Burned’ recalls a more polished La Grande-era Laura Gibson and ‘Cast’ breaks out into a chorus containing all the majesty of Jeff Buckley’s ‘Mojo Pin.’ Elsewhere, things are much tamer. ‘Stone Bird’ is as delicate as anything from Alex Turner’s Submarine soundtrack whilst the glowing ivory keys of ‘Can’t Make It So’ are as warm as the cinders of a fireplace. The contrast is welcome and provides a worthy resting point to some of the album’s more lofty moments.

All the Crooked Scenes is an accomplished debut full length which makes its influences well known but crafts a cliché-free and enchanting sound that is very much Ellen and the Escapades' own. It’s charming enough to make it into the collections of those Radio One listeners who’ve played Mumford & Sons to death, but will still appeal to those looking further left-field.