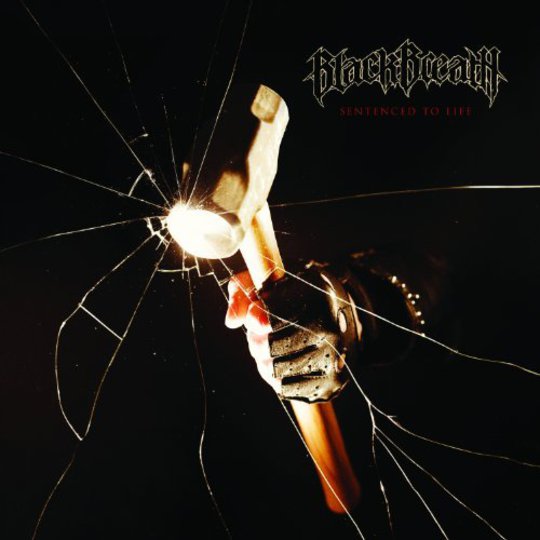 Metal isn’t what it used to be: it comes in little packages these days. Labelled black, noise, dark, thrash, death, ambient, doom, sludge and all variety of prefixes, the humble formula for the metal LP has been twisted and distorted beyond recognition. And one of the chief responsibilities for that change lies with Sunn O)))’s Southern Lord imprint, characteristically the most avant-garde and famous heavy label operating today. But one of the best bands on their current roster, Black Breath, are a beautiful, perfect throwback to when things were simpler.

Sentenced To Life is a reminder that sometimes, sticking to the formula sells records: Black Breath might lack the hooks of say, a Torche or a Baroness, or the smarts of Liturgy and Wolves in the Throne Room, but they’re leaner, meaner, rawer, harder and vitally faster. This is a pure metal record, unadorned, without the merest attempt at genre splicing, experimentalism or intellectualising. It takes 37 minutes, approximately half the length of that avant-garde black metal limited edition vinyl LP you’ve just bought, and it reminds you that before the beard scratching, metal was about paralysing the audience through sheer hypnotic speed and technical prowess.

Only three of the tracks on here clock in at anything over four minutes: and nearly all of are sub three-minute packages and it’s that sheer gleeful pace that makes Sentenced To Life such an enjoyable record. It’s a remembrance of a time when all that metal was about was pure exuberant hedonism and barely controlled violence. The clichés don’t even sound dated: the “GO!” that opens up 'Doomed', the one-word gang shout choruses on, oh, almost every track, the way one guitar wails high and fast over another before they switch lanes. There are breathtaking moments of precise control: 'Feast of the Damned' changes pace, lurches to a stop, cuts in, cuts out and generally exhausts the listener with twists and turns. And, in keeping with previous efforts, there are more riffs than you can reasonably shake a stick at.

As Noel Gardner wrote for this very site back in 2009, Black Breath often give the impression that they write riffs with the same consummate ease that most of us struggle to find to write Twitter updates. As such it should come as little surprise that they’ve come up with a twofer this time round. 'Endless Corpse' features not one but two contenders for riff of the year: a chugging, lumpen Thor’s hammer of guitar doom juxtaposed with arpeggiated lightning speed thrash before dissolving back again into a cataclysmic, sludgey finale.

Best of all is the record’s longest track, the imperious 'Obey'. Taking Black Breath’s usual Lemmy-esque sense of pace and slowing it down a notch or two doesn’t remove any of the punch, and as for the stars‘n’stripes solo which sends lead guitar cascading throughout the final third, it sends shivers down spines and maybe even brings tears to eyes. If the true guitar solo is dying, it’s at least taking someone else down with it.

Kurt Ballou’s production once again deserves mention. The Converge man keeps a heavy dose of low end crunch to balance out the band’s potentially trebly thrash, the bass thundering as twin guitars scrawl and dance over the top. The drums feel notably compact and powerful, with the vocals kept high enough in the mix to be decipherable, but low enough not to distract from the instrumental fireworks which are the true star of the show.

In the interests of form respecting subject, here feels like the time to curtail this review. Because it’s that tightness which really makes Sentenced To Life such a successful record: it really doesn’t do anything more or less than what was previously exhibited with the Razor to Oblivion EP and Heavy Breathing. But it does it at such breathtaking speed (have I got across just how fast this record is yet?) that it’s intensity is made irresistible. A surefire contender for metal album of the year and certainly worthy of some crossover recognition, Sentenced To Life deserves some adulation purely for reminding us that metal doesn’t need bells and whistles to be thrilling, even in 2012.