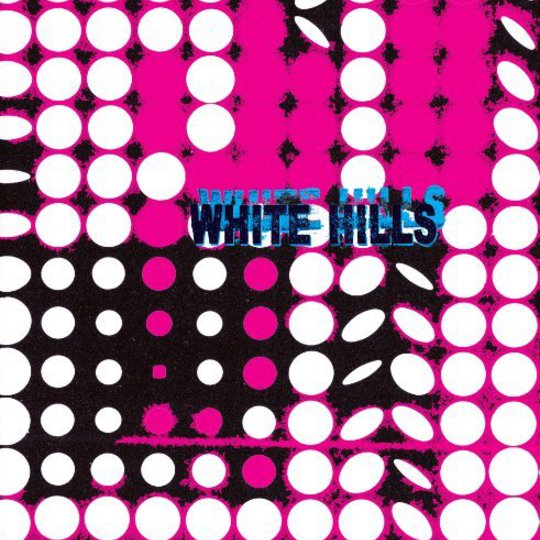 For a group that sound like they’re no strangers to the bong, White Hills certainly are prolific. Frying On This Rock comes less than a year after their triumphant H-p1. Critically lauded and prominent in numerous end of year lists, H-p1 was 70-plus minutes of immersive, trance-inducing space rock interrupted by quieter passages of darkly ambient moon squelch which some of us are still trying to fully digest.

I don’t know if it’s the member of the group known as ‘Ego Sensation’ who is the impetus behind this erroneously swift follow-up, but this record comes too soon and too under-prepared. Forty-five minutes might be the running time for your average pop/rock LP, but for a band that trades in hypnotically indulgent, elongated Martian music, a mere five tracks feels skimpy. Along with the comparatively meagre length, Frying On This Rock also represents a dip in quality almost as large as one of those incomprehensively massive planets that induce Professor Brian Cox into a state of near sexual awe.

Apparently much of Frying On This Rock was written on tour, and that’s really where it should have stayed. If released as a tour EP to be purchased at budget price from a friendly merchstand roadie wearing a vintage Pink Floyd t-shirt, or as some sort of bonus disc appended to a limited run of a proper album, the expectations would be lower and the listening experience more satisfying. Unfortunately, this recording is being marketed (and priced) as the official, full-length sequel to H-p1, and it this context it disappoints (perhaps here the label is to blame, rather than Mr. Sensation).

‘Robot Stomp’ is arguably the lowest point. It doesn’t really seem to start, or go anywhere, or ever end. It basically sounds like the penultimate section of the live rendition of any old song, when the tune has ended and the band are all pulling poses, dramatically jerking their instruments up and down, up and down, playing the same one or two notes over and over again, and making that “duh-duh-duh-duh-duh-duh…” noise before the final climactic “Duuuuuuuuuuuuuh (lots of cymbals, lots of cymbals) DUH-DUH-DUH!” In order to provide some form of variation, there are some spacey effects over the top which sound like Doctor Who’s K-9 squeezing out mechanical pooch trumps at random intervals, but they don’t distract from the unrelenting duh-duh-dirge.

Arguably, this is groundbreaking. Part of Dylan Carlson’s genius was in recognising that his favourite segment of any rock song was the closing distorted fade-out and trying to capture and perpetuate this moment, as demonstrated on Earth 2 - a record which basically invented a whole new genre. Perhaps in ten years’ time a couple of robe-clad White Hills fans will hone the “duh-duh-duh” to startling critical and commercial success. Or perhaps they won’t because, rather than euphorically floating forever in distortion limbo, being trapped in the repetitive plod between where a song should be and where a song should end is frustrating and irritating.

The opening section of ‘Song of Everything’ is a more convincing slice of intergalactic, mind-frazzling space rock. But then about halfway through it descends into a tranquil bit with silly spoken-word vocals about how the universe sings and sapphires shine and you should “open your mind and take it in”. As if they weren’t compared to Hawkwind enough, now the ‘Hills have even started copying the slightly embarrassing bits where sci-fi author Michael Moorcock was given free reign to druggily lecture about the stars, the planets, the infinite cosmic indifference of space, oscillating ornaments, bleeding orifices, aching pelvises, and bringing “all bodies to orgasm simultaneously” (ahem).

‘You Dream You See’ is better. Brash and heavy, the nasal vocals (higher in the mix than H-p1’s) and the slacker riffing techniques are reminiscent of Mudhoney when they accentuated their stoner rock side in the noughties.

The closing track’s 14 minutes are in a similar style to ‘Robot Stomp’, though not quite as painful. Its psychedelic washes and wigged out soloing make up for the awkwardly repetitive drum pattern, but it’s still light years away from the highs of H-p1.

Open your mind and take it in? Regrettably, there’s little substance to take in here. It’s like booking a trip on Richard Branson’s moon rocket and ending up with a tour of an abandoned Zavvi.