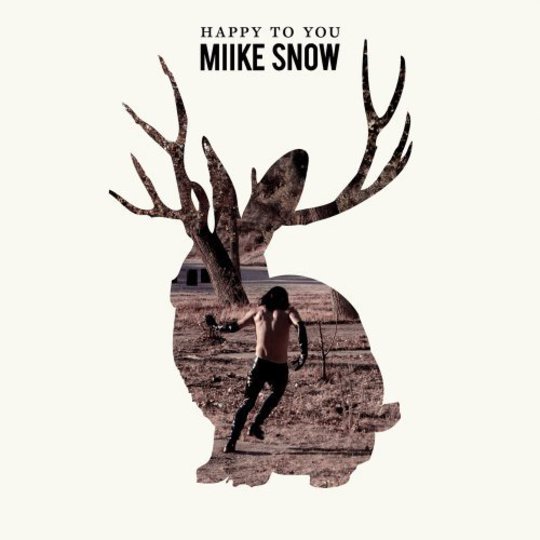 With their winning mix of two Swedes, a New Yorker and intellectual piano pop, Miike Snow can fill coffee houses quicker than a sign that says “Free paninis!” They proved that back in 2009 when their debut, Miike Snow, shifted 200,000 copies, and got the art crowd jiving to its pumped-up Cut Copy falsetto. Having since toured the world testing out their dance tunes for introverts, Happy To You is Miike Snow squared - the same mix of insights vs. bongo drops but now with gentler electronics, like Hot Chip wearing wooly jumpers.

After the band’s first single ‘Animal’ appeared on soundtracks galore the trio have taken notes, funking up their ponderings for viewers of New Girl. There’s a frenetic, commercial edge to these ten new tracks, the most biting being ‘Devil’s Work’ and its would-be Kubrick video. Built from epic horns, a penetrating piano line and Christian Karlsson’s cryptic asides (”The blinds here are so sharp and they cut / The light from the primitive sun / You know I really wanted her / Society thinks so highly of / This hotel I vomited on”), it could easily fill the gap left by ‘Hotel California’ and the end of Bad Boys II. ‘Enter the Joker’s Lair’ shows their cuter side, all bouncing electro and Berlin synths, while the rattling keyboards of ‘Bavarian #1 (Say You Will)’ are pure viral bait - the kind of bouncy jingle Apple’s ad creatives go after.

Miike’s commercial scheming starts to crack when they move out of the mould, and show that, while Happy To You will certainly open doors for them, it could’ve scored more indie points by sticking to disco or despairing ballads only. Too twee for dancing but too zappy for the lounge, the trio are at their best when polarised, such as on ‘God Help This Divorce’ and its chiming heartbreak which hides Karlsson’s least evasive, most crushing lyric yet (”So many beautiful faces that don’t need me”). He sings this under his breath, playing the part of a man trapped in singles’ bar and mourning the beauty queen he just suffocated (with boredom). ‘Vase’ is its geometric opposite: growling Casios and beats like a pistol range, the vocals again requiring scrutiny and Google. ‘Black Tin Box’ could be a taste of the band’s future, the soft slow trance mimicking Miike Snow if they’d been mixed a little harder, everything blurred into soup.

However, what Happy To You lacks in focus, it makes up for with underlying warmth. There’s a ditzy charm to the way this album keeps shifting, like watching a kitten do tricks to get your attention. The disco fidget of ‘Paddling Out’ ends things on a positive, with Karlsson commenting ”There is someone here who laughs too hard at everything”, almost with relief. Like its nine previous tracks it doesn’t break any barriers but it’s a good enough workout for your brain, ears and ass, with even the most committed Miike Snow opponent noting the sense of value (this is, after all, the 'three-headed band with the one-band name'). Four or five indie-pop belters caught up in b-side material it might be, but at least it offers the kind of arty knees-up not seen since Damon Albarn stopped wearing trainers.