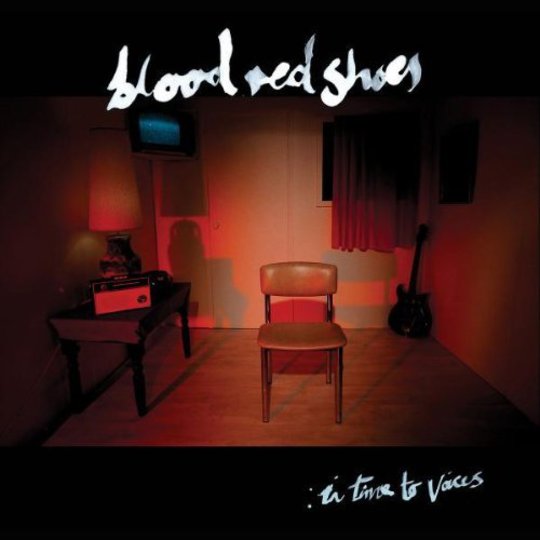 Two-piece bands are nothing new. We’ve all had the debate about the worthiness of leaving the bass behind... and from the Black Keys to Frank Black, from Jack White all the way back to Mates of State, I tend to find myself very much a bass kind of girl.

But Blood Red Shoes have proven an exception to the rule, especially when it comes to their new album In Time To Voices. This is an album so texturally complex that there is simply no space to consider what it might, or might not, be missing. It’s exciting to hear that, while Steven Ansell and Laura-Mary Carter have developed with frightening speed as musicians, they still haven’t let go of their punk-tinged roots. In Time to Voices is aggressive, it is irreverent, yet also very ambitious. Carter’s vocals seem to have developed a softer more mature edge, which fill the room on songs such as ‘Night Light’ and the title track. In fact, there is no aspect of musicianship on this album that is not considered, sparing, focused. The duo have clearly thrown themselves into this project and managed to deliver what Carter promised to be 'a really ambitious record, not something which reflects our live show but something which is only limited by our imaginations'.

The pair's imaginations have carried them on tiptoe between tranquil lakes and raging seas, finding a perfect balance in tone and volume. Nods to the anthemic, with near-orchestral texture such as you’ll find in ‘Lost Kids’, are instantly pared back to reveal the technical ability, complex biting rhythms and dirty crunching guitar of the BRS of old. It’s no surprise then that ‘Cold’ was chosen as the lead single, showcasing their ability to combine captivating melody with an invitingly heavy sound. This is up there, in my mind at least, with the Two Gallants’ uncompromising brand of rock.

But perhaps even more exciting, if only for its sheer contrast, is their punk rock interlude ‘Je Me Perds’. Where successful long-term collaboration with co-producer Mike Crossley is resulting in sleeker, better produced music, it is almost a relief to come across this little gem of Sonic Youth/ Pixies-inspired madness. It has all the passion and intimacy of the never ending stream of live shows that have been keeping the pair busy around the world since the release of Box of Secrets in 2008. And it is this constant collaboration, or perhaps one too many late nights in hotel bars and biker dens, that gives the whole album an undertone of intimacy beneath the professional polish. Here is a couple whose musical style has grown immeasurably, and has grown in unison. This can also be felt in more introspective tracks such as the haunting crescendos of ‘Silence And The Drones’, and ‘Slip Into Blue’s detached, hovering vocals.

‘7 Years’, the closing song, is a beautiful ending, steeped in longing, gently harmonised and fading finally down to the static hum of the album’s end. It leaves you with the sound of a cooling, flickering flamethrower just waiting to be reignited.