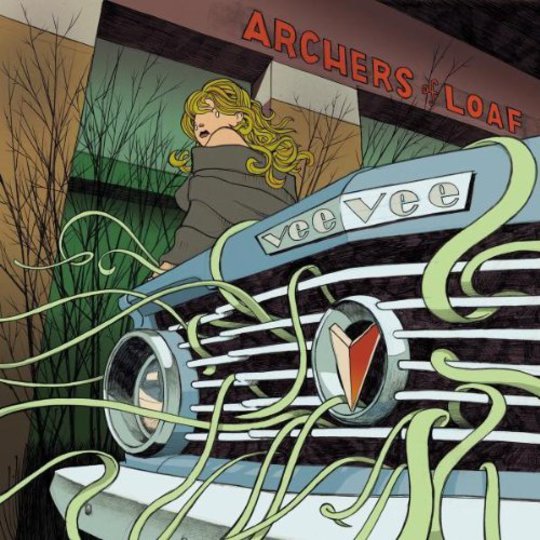 Along with Superchunk, Archers Of Loaf are without a doubt one of the best Indie Rock bands you’ve (maybe) never heard of. Existing at a time when Indie Rock actually warranted and pretty much required the capital letters; Archers Of Loaf released their debut album Icky Mettle in 1994, a time when alternative rock was fast becoming big business. As a result, they became a pretty big deal.

Being at least a growing concern obviously raised a cynical streak within frontman Eric Bachmann. One listen through to Vee Vee and it’s quite clear that he, and by extension the rest of the band, were not particularly keen with being Indie Rock’s next heroes, or living in the shadow of Pavement, one of the other pitfalls of being an Indie Rock band in the early to mid Nineties. On ‘Let The Loser Melt’ Bachman tells us that “it’s too bad that your music doesn’t matter”. This encapsulates the outlook on Vee Vee – cynical, jaded, and cuttingly funny.

Comparisons to Pavement did the band no real favours. Whilst it’s understandable, particularly on a song like ‘Nevermind the Enemy’, which is very much in the same defeatist slacker vein that early Pavement mined, it’s a comparison that fails to take into account how much more of a rock band Archers Of Loaf were compared to their weak wristed counterparts from Stockton, CA. If anything, they’re Pavement’s angrier, more cynical older brother. A song like ‘Harnessed in Slums’, the greatest lost Indie Rock anthem if there ever was one, has much more of an edge, and is much punchier than anything that other band ever released. There’s a feeling of rage present on Vee Vee that few other Indie Rock bands managed to tap into. It’s the same kind of thing that The Replacements perfected – angry, dissatisfied, jangling, wobbly Indie Rock.

Vee Vee is very much a product of its time. The idea of the rock band acting as the rock critic doesn’t exist as it did back than. ‘Greatest of all Time’ is a critique of the fickle build them up and knock them down attitude of the music press and fans, when the audience is either “toasting their dead hero” or calling to “throw that bastard in the river”. It ends with the chorus “the underground is overcrowded”, a statement that probably carried a lot more weight back in the mid Nineties than it does now. Underground or alternative music doesn’t exist in the same way it did back then. This, coupled with the various references to stashes, lighting up, guestlists and “rocking out, ROCKING OUT”, means that Vee Vee is an incredibly Nineties album. You couldn’t distil your feelings about music as succinctly; there’s not such a clear us vs. them mentality now, the lines are a lot more blurred. Of course, you still want to believe in the fight, which makes Archers Of Loaf’s passion all that more appealing.

The second disc in this reissue is made up of unreleased demos and songs from long out of print 7-inches and compilations (another Nineties touch point). The majority of these demos will only really interest the hardest of hardcore fans. They don’t really reveal much about the songs on Vee Vee, and suffer from the lack of a full band to really get the mood across. The single version of ‘Harnessed In Slums’ is worth a listen, being a little beefier than the already very meaty album version, and ‘Bacteria’ is Nineties mid-paced Indie Rock at its finest, with lots of stops and starts. It’s quite interesting to hear Archers cover a John Coltrane song but it’s not really required listening. The remastered first disc makes up for the lack of any truly juicy bonus material, being that it’s a great album in itself, and is more than worth the price tag. Giving Vee Vee the reissue treatment should hopefully propel the album from being forgotten about to the cult classic status it undoubtedly deserves.