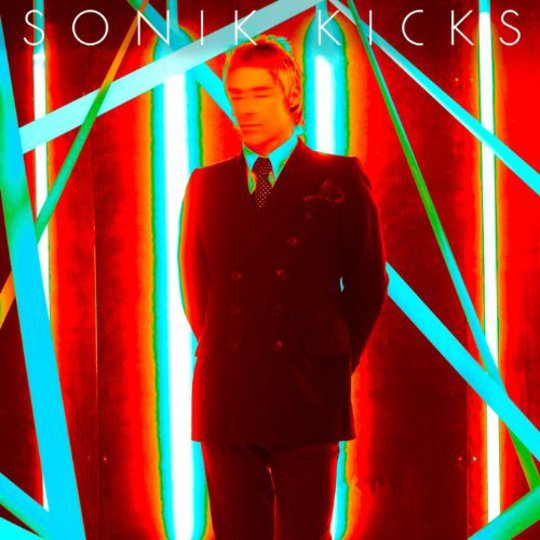 With a 22-track experimental opus and a Mercury-nominated whipcracker preceding this record, you could forgive Paul Weller if he fancied playing it a little bit safe with his latest LP - maybe roping in some guest stars and recreating the vibe of Stanley Road or Wild Wood. Credit to the man with one of the crappest nicknames in music then, because with Sonik Kicks The Modfather has completed a hat-trick of records that genuinely challenge his status quo.

With any Weller record, the sense of energy and enthusiasm that you get on first listen is usually a good indicator of the standards to be found within. Even on his more traditional records, you can see if his heart is in it or not, and proceed or not from that point. One listen to ‘Green’, Sonik Kicks’ opener, tells you that it’s going to be worth sticking about.

Shooting out of the speakers like an impatient cousin to Wilco’s ‘Art of Almost’, ‘Green’ is a bundle of energy that fizzes around Weller’s steady stream of beat poetry, all ‘Tomorrow Never Knows’ drums and guitar squalls bursting out unexpectedly. It’s the first part in an opening collection of tracks that defy Weller’s reputation as a curmudgeonly keeper of the classic rock keys.

'The Attic', a sharp blast of guitar pop energy built on a hyperactive drum beat and surging strings, is chased around the corner by 'Kling I Klang', a track that kidnaps Ray Davies and plonks him down in the midst of a propulsive motorik rhythm. There’s probably some story about the lives of ordinary Lahndan folk going on somewhere, but it’s too frantic to stop and pay any attention.

It’s a pretty fiery, experimental trio to start any album with, albeit in a Noel and the Chemicals way rather than Metal Machine Music (thank God). Following it is a true indicator of how Weller has not just paid lip service to the idea of pushing himself. Strings bubble and disintegrate for a two-minute respite, before lush Nick Drake-esque strings signal the arrival of ‘By The Waters’. A beautiful, languid track, it’s a real change in direction for the LP – but not the first.

‘Study In Blue’, a beautiful duet with Weller’s wife Hannah that initially harks back to his Style Council days with a dub bass throbbing underneath, is perhaps the centerpiece to Sonik Kicks. Established artists can often raise an eyebrow or two by paying lip service to a couple of new genres, and if you only heard ‘That Dangerous Age’ from this LP, a catchy number let down by lyrics that sound like a dressing down from your dad, you might put Weller in that category. When ‘Study In Blue’ pushes itself into an extended dub workout before being followed by the XTRMNTR-esque ‘Dragonfly’ and the anthemic ‘When Your Garden’s Overgrown’, you know Weller has gone the whole hog.

It might seem lazy to suggest that Sonik Kicks combines the urgency of Wake Up The Nation with the boundary pushing of 22 Dreams, but it’s such an apt comparison that it’s difficult to ignore. Weller seems enthusiastic, upbeat and genuinely inventive across the whole LP, with only a couple of minor missteps throughout. Noel Gallagher has been bigging up his collaboration with the Amorphous Androgynous for a while now, suggesting that it’s going to be pushing the boat out. Hate to tell you our kid, but Weller’s got there and done it before you.