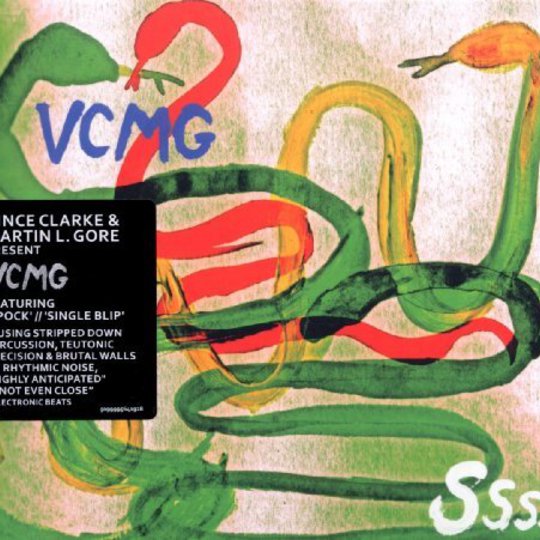 So let's imagine you're in music PR, and although you can't afford to eat for the next nine days and your panhandler mates stole one of your shoes, and last night you bunked with a guy at the homeless shelter called 'Scary' Terry who when you asked him why he was bleeding replied 'It's ok, it's not my blood....'... you've been tasked with selling VCMG, the new collaboration between Vince Clarke (Yazoo, Erasure) and Martin Gore (Depeche Mode). So the first thing you have to do, your dead-eyed head-of-department will tell you, is devise your 'elevator pitch'; Don Simpson's '25 words (or less)'; or what's otherwise known as 'the hook'. Happily, that won't be a problem when it comes to Ssss. No, the real problem lies in choosing just the one.

Do you lead with the, count 'em, 73 top 40 hits the duo have racked up between them since Clarke left Depeche Mode in 1981, making Ssss the synthpop equivalent of a Cobain/Lennon side project? Or maybe is the angle Martin Gore's return to pop, after years in the experimental wilderness? Maybe your headline should be 'Certified Pop Genius Does Techno', with the prospect of Vince Clarke trying his hand at straight-up bangin' dance music a truly mouthwatering one. Alternatively, you could go for the heartwarming human interest story, of two greying men who were never really friends in the first place, coming to terms with each other after 31 years of estrangement. People love a happy ending.

Well the answer is none of these, because, quite simply, the VCMG project is too good for words . Which funnily enough, is the duo's opinion on techno, with Ssss a wholly instrumental album, and all the more penetrating for it. Now... some words.

If you're wondering what happens when you put two pop titans in the same room together, it all comes down to simple maths: titan + titan = double the ideas. But the thing is, Clarke and Gore never made it as far as the same room. The album was composed entirely by email, which entailed a back-and-forth process of amendment, subtraction and, for all intents and purposes, oneupmanship. The effect was to increase the ideas quotient by at least double again. Because you see, although consistent and constant enough to retain that hypnotic quality native to minimal techno, the majority of the tracks chop and change, jarringly sometimes and with bombarding frequency, between two quite distinct 'spatial zones' ie Clarkeworld and Goreworld. And with each successive handover comes a new trick, be it the lazerfire on 'Spock', the moaning machine-talk on 'Windup Robot', or indeed the many beat syncopations built into the trajectory; arriving mid-track to funkify the trip, or cutting against the rhythm and transforming what initially was a bit of thumping electro into a towering threnody of mutant industrial.

It's the sound of two masters alternately warring and spurring each other on, from opposite ends of the North American landmass, with the listener as war profiteer, struggling to keep up as the layers pile up, the tension builds and the roof comes off. The end product is stern, frigid and heavy minimalist-techno, which also happens to be pop as fuck: urgent, impatient, sculpted, immediate, and incident-packed. Who needs vocals when you have a combined 60 years of pop-mastery on your side? That Ssss is also coherent, is a victory for experience and downright classiness.

Sustaining a bulletproof level of quality throughout, nonetheless there are a couple of tracks that peak above the rest. The definite highlight is the keynote 'Windup Robot', which bends and snaps and soars its way to fever pitch, before... click... the lights go out. Then, in the party-tooled mid-section appears the electro-industrial 'Single Blip' and bass-junky giant 'Bendy Bass', which between them make up the club face of what The Quietus are calling 'The New Bleak'. Possibly Clarke's closest brush with post-punk, elsewhere 'Lowly' is what Brainbug's 'Nightmare' might sound like re-imagined as some ritualistic cyberpunk trance; an unwelcome visitor in the dead of night which, after slipping into your worst dreams unnoticed, drags its Soviet sci-fi effects across you like cold feet, before performing a domineering sex act to the beat of slow-dawning cataclysm and adrenalising train-track effects. It's the same balance between hedonism and self-flagellation the duo strike on the playful but punishing 'Zaat', and again on 'Spock' - the glowering lead single which, despite its gloomy acid-trance solemnity churns out an endless supply of funhouse flourishes, from its spikey synth bursts to its myriad climactic rushes. As a couple of incurable pop-smiths, naturally they're here to please.