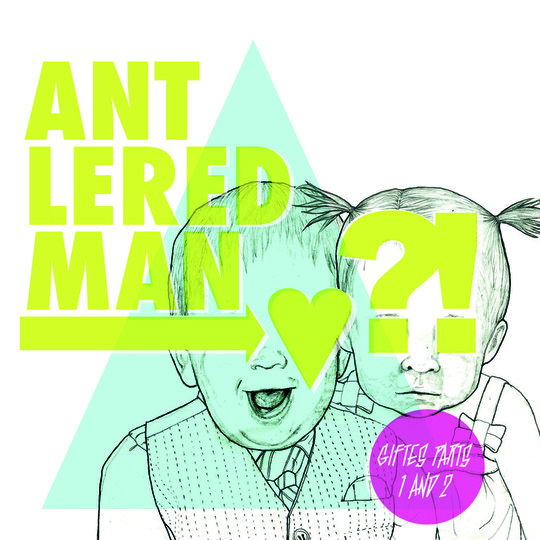 Sure, music’s great and all, but if there’s one thing in life which everyone can really agree on, it’s that an Antlered Man is a terrifying prospect. Even more so when this Antlered Man spouts semi-politicised lyrical vignettes amidst crushing distortion. And to top it all off, it comes from Bermondsey. Yikes.

It’s been a while since a good old fashioned political alt. rock foursome came along and, as such, Antlered Man are more refreshing than they perhaps ought to be; their sonic template, all rabid basslines and spoke-sung vocals, is by no means original, with everyone from System of a Down to Faith No More to Future of the Left carving similar niches in the last couple of decades.

Yet Antlered Man still possess an eccentric charm that’s undeniably one of their own. Their debut album is peppered with odd instrumental touches throughout, whether that’s blasts of brass or the wonderfully bonkers panpipe/whistle combo that forms ‘Buddhist Soup’s main hook. Yes, this may be a strange, dual-antlered hybrid of quirky intention and fervent ambition, but it takes great care to bridge the divide and a lot of love has clearly gone into Giftes 1&2.

Largely thanks to the band’s political aspirations (homelessness, drug addiction, sexism and delayed responses to natural disasters are among the subjects in the firing line), frontman Damo Holmes can occasionally sound obnoxious and, dare I say it, overly in-your-face, but isn’t that half the point? Antlered Man are not a band with any intention of backing down and being inoffensive. Indeed, any musicians who treat Mike Patton’s back catalogue as the holy scriptures are bound to display something at least a little out of the ordinary and, to this end, ‘If You Can’t Beat Them, Try Solvents’ is a woozy nursery rhyme call to arms, while ‘Platoono of Uno’ flits between grunge, post-hardcore and schoolyard taunts. It’s an opening trio which not only demonstrates the band’s punk aestheticism but also their propensity for tongue-in-cheek rock and roll japery.

The larks continue throughout, whether that’s in ‘Schizo Tennis’s nods to sports personalities or the worryingly unhinged concept of ‘Balloons, Needles, Sunlight and Evil’. However, it’s ‘Surrounded by White Men’s truly gargantuan bassline and ridiculously catchy (if a little late to the anti-Bush bandwagon) chorus of “Daddy buys me anything / presidency, oil company” which provides the album’s standout moment. Unfortunately, the momentum amassed from this track and the album’s other opening salvos eventually culminates in a less exciting second half; ‘Misruly Roo’, in particular, may be a seven-and-a-half minute lesson in Melvins sludge riffery, but it ends up as more of a revision lecture, covering much of the same ground that has gone before.

Like a council tax referendum at a carnival, Giftes 1&2 utilises a fun façade to deal with some pretty heavy issues. It’s this bipolar charm which System of a Down once used to great effect but experiences a new lease of life here, albeit with a quintessentially British twist and a few teething problems. Antlered Man might not set the world on fire just yet, but Giftes 1&2 certainly provides the first flick of the lighter.