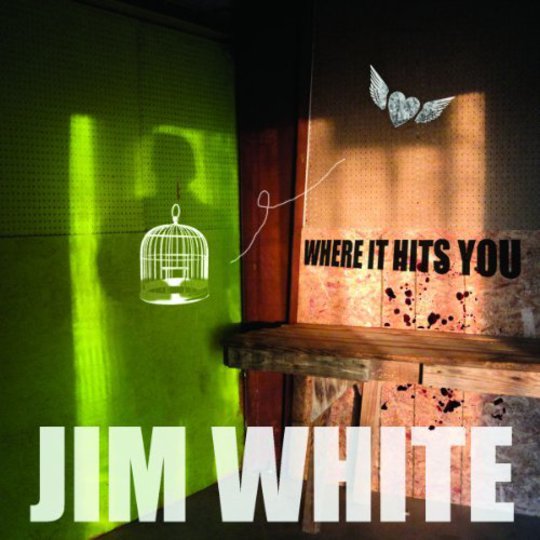 From the opening bars of ‘Chase the Dark Away’, it’s clear that Where It Hits You will be a very different prospect to the Jim White of former years; the guy that was searching for the Wrong-Eyed Jesus is no longer with us, though his soul remains. His particular brand of Americana has grown up over the years and has a point to make. As is evidenced by the choice of album title, this is an album of heart break and hurt, a collection of songs built on the trauma of White having been left by his wife – the mother of his children – for a younger man, during the recording of the album.

Jim White says the title came to him before he had even recorded a note of the album, a fact reminiscent of Courtney Love’s comments about the lyrical content of Live Through This somehow reflecting Kurt Cobain’s suicide, though it was written long before; ”I’m not psychic, but my lyrics are.” One thing Jim has over Courtney, though (there are several things, but we don’t have all day), is the knack of growing old gracefully. On record, anyway. Through the heartache, there is a sophisticated definition of sound; this is no guts-on-the-floor album of raw country blues. And, he still manages the Southern-fried humour that makes him so appealing. The pain is spelled out plainly on ‘Sunday’s Refrain’ as he mourns “I’ve got no one to talk to / Saturday’s rain falling on me” with lazy wind instruments sighing in the background, gentle female voices serving as a bitter reminder of the woman he’s lost. It’s an excellent example of the more refined sound that Jim White has honed; at times it almost reaches the majesty of Cat Power’s The Greatest, though a rugged one, for sure.

The funeral procession doesn’t last long though. In fact, after the first couple of track, the mood of the album has shifted entirely. ‘Here We Go’, the album’s centrepiece, is rousing; not unlike Alabama 3 and a far-cry from the delicacy of the album’s opening tracks. The only sound missing from the chaotic backing track is the sound of bodies and glass crashing from the bar-top. An optimistic anthem, it’s White and a bevvy of friends; a call to arms and a statement of intent.

The shift in mood turns out to be a temporary one, as a dark cloud hangs over ‘That Wintered Blue Sky’, with White crying “nobody ever got / nowhere alone,” his chest sounding tight as he forces the words out. And you kinda know, before he even opens his mouth, that ‘Epilogue to a Marriage’ is going to be a heartbreaker. Which it is. “On the best of days / Still there’s hell to pay.” A beautifully dusky duet, the instrumental plays out for two minutes before either sing and when the song takes a wry look at the rotten mess that Jim White’s wife has left him in. It’s a state that he describes as “sub-devastated” but on record, he crafts that devastation into a work of art.