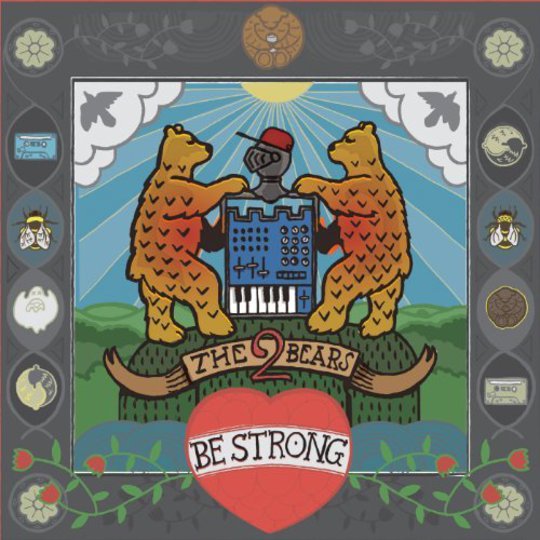 To call The 2 Bears a side-project is to damn them with the lineage of hundreds of half-baked solo ventures and ill-fated explorations into electronica. With Be Strong Joe Goddard and Raf Rundell aren’t tentatively dipping their toes into the oft bastardised waters of house music. The Hot Chip synth maestro and his lesser known pal have created an uplifting ode to a genre they clearly cherish for its communal spirit and lubricated anthemics.

Their debut album marks the latest milestone in a casual amble encompassing three EPs and a weekly Ministry Of Sound radio show. You suspect the world might have been denied a full length LP from the duo had Radio 1 not taken so kindly to their cheeky woodland romp ‘Bear Hug’ last summer but who cares when its full length follow up is this good?

Pieced together from the highlights of their past releases with plenty of new material to boot, Be Strong wisely mines the rich vein of elastic cheer which has always found The 2 Bears at their carefree best. ‘Church’ and ‘Faith’ aren’t songs from the Autechre school of studied over-analysis, they’re tracks to get joyously paralytic too. The kind of songs that reside in the cloudy fuzz of good times lived in the moment and remembered later with a wistful gurn of unknowing.

A slinking throb of bass and brittle percussive beat form the backbone to almost every track this LP has to offer, yet alongside the merriment of ‘Work’ and ‘Get Together’ there’s a pleasant subplot to be mined. Coming from an outfit who don tatty teddy costumes in their press shots, the pair’s shout outs to Wiley, Company Flow and Lee Scratch Perry in ‘Warm & Easy’ and ‘Be Strong’ are far from subtle. They do however, reveal The 2 Bears as a group steeped in and still in love with dance culture.

‘Heart Of The Congos’ specifically details Rundell’s introduction to rave while working in his teens at the Hoover Building. Musically, this autobiographical peon to the “the sound that keeps me on the ground” might be a bit nondescript but in the context of an album rammed full of bangers, a reflective breather is much appreciated. It’s this same warmth and stoic refusal to get tied down by weighty subject matter that carry ‘Ghosts & Zombies’ and ‘Time In Mind’ beyond the status of mid-album fluff they veer so very close towards.

Sometimes it’s difficult to use the word ‘fun’ in a review without worrying whether you’re damning its creators with faint praise. In the case of Be Strong, there really is no better descriptor to surmise the jubilant exhilaration at its core. The 2 Bears show no concern for what critical narrative or end of year pantheon they sit in so why should you? Just enjoy their album for what it is, an absolute blast.