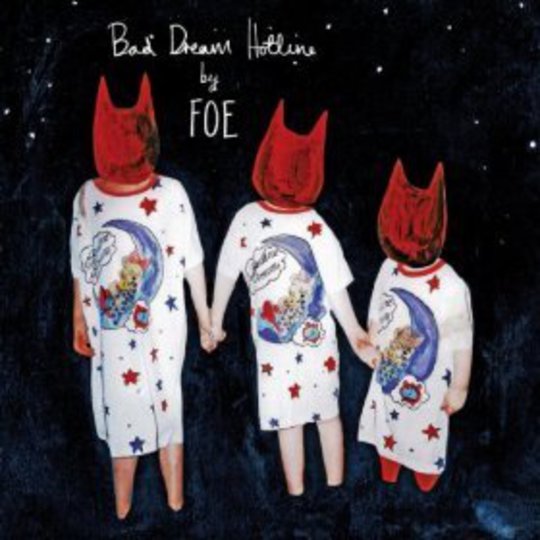 When attempting to scan through the colourful back-story behind FOE (or 21 year-old "eccentric" Hannah Louise Clark and her supporting cast) you are never quite sure what to believe. Viewed suspiciously at school as a child witch; plagued by night terrors of Oompa Loompas; having a perennial love of chips and Roald Dahl; discovering PJ Harvey and Nirvana at an early age before eventually growing prematurely cynical with the music and mannerisms of her classmates and channelling her abhorrence into making her own at the age of 15 through the timely purchase of a £40 keyboard. Good copy, I’ll grant that. But whereas it is of the utmost importance to never let the truth get in the way of a good yarn, ultimately the true statements must be found on the tracks. And thankfully, Clake's debut album matches her divergent back-story with songs of bizarre promise and gleeful exploration.

You certainly do get the impression that the inside of Clark’s head is a rather interesting place to visit. Streaming out from under her trademark pink wig is a torrent of musical ideas that threaten, but never succeed to wrestle each other to the ground in a mutually assured defeat. Bad Dream Hotline can’t decide whether it’s a Riot Grrrl revival, a dirty pop frisson, a proto-grunge embrace or a streaked mascara-punk riot. And frankly, it's all the better for it. In being tossed between several different musical corners yet retaining its style and individuality, it comes across as a remarkably strong and luminous statement of intent in the dark dawning of the year.

It takes less than 40 minutes to get through the 12 tracks of Bad Dream Hotline and there’s barely a minute goes by without you being jerked to one side by something unexpected looming out from the shadows. The fuzzy, giddy playground nightmares of ‘Mother May I?’ and ‘Tyrant Song’ leer sleazily and swing muscularly while the slick ‘Jailhouse’ and ‘Genie in a Coke Can’ are gilded with a juxtaposition of shimmering pop intelligence and punk snarl. ‘Get Money’ is a fierce trash-rock stomp and ‘Ode to Janey Lou’ is MTV post-grunge shanghaied and shipped into the twenty-first century. But best of all are the brilliant ‘The Black Lodge’ which drags Polly Jean into the world of the Brothers Grimm armed with a bottle of vodka, while the clipped and taut grooves, dynamic shifts and ghostly keyboards of single ‘Cold Hard Rock’ are simple, direct, effortless and glorious. And when the album drops the typically raucous frenetic tempo on ‘A Handsome Stranger Called Death’, Clark and Company manage to find an elastic groove in the space between the morbid curiosities. In short, it’s deliberately ramshackle, pointedly eclectic, confidently out-of-sync with modern trends. And above all, a whole stack of fun and wicked games.

There are far too many records where, with the intention of being unique, artists throw idea after idea at a song until they’ve effectively covered up any simple premise or purpose. What makes Bad Dream Hotline particularly striking is that almost without exception, Clark’s scattergun approaches tend to find their mark: the result being that the mad churn and froth of ideas actually enhances, rather than detracts from the listening experience. Though she probably wouldn’t like to admit it, her sound has a certain kinship with Xenomania in its stubborn reluctance to acquiesce to traditional expectations and standards but in the overall observation, FOE’s sepulchral day-glo graveyard pop is something all of her own – a product of a mildly warped, overspeeding mind that probably grew up looking around and saying “What is all this shit I have to deal with?”. Her reluctance to accept convention is to our benefit – Bad Dream Hotline is a gleeful shove in the back to anything of a devilish pop slant that may be planning to peek over the parapets into 2012. The gauntlet has been thrown down; even if it is most likely pink, glittery and streaked with blood and mascara.