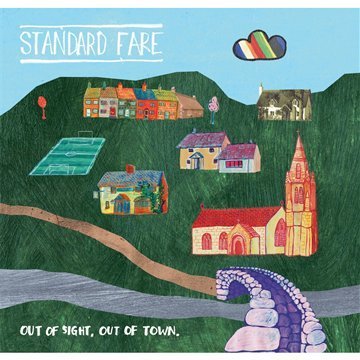 Standard Fare - Out Of Sight, Out Of Town

While Los Campesinos! have greeted adulthood with a bitter and acidic after taste, Standard Fare have approached it with accepting subtlety.»

limbo. it's a funny place to be, but it provided inspiration for the second album from standard fare, the sheffield-based indie-pop power trio who debuted with 2010's 'the noyelle beat', their lovelorn, melodic songs and male / female vocals making them the new darlings of the indie-pop scene. these 12 tracks, then, concern subject matter as varied as the holocaust (recent single 'suitcase', written about a survivor and friend of emma's family who recently passed away), bitterness ('kicking puddles'), frustration ('dead future'), divided families ('half sister') and unfaithfulness ('early that night'). with the widening lyrical scope, the album's texture has become more diverse too, with a greater contrast between heavy and light, fast and slow, dancefloor and bedroom. the guitars are beefed up, the melodies are unbeatable and the words are flecked with wicked humour. recorded with producer alan smyth at 2fly in sheffield, the album represents a years worth of writing and 11 days of recording, which, compared to the whistle-stop weeklong session of their debut, is practically a marathon. in addition to the tight power trio of guitar-bass-drums, the band are augmented this time by a trumpet player (brad san martin from boston's one happy island) and violinist (emily gunn from sheffield's nat johnson and the figureheads), adding an extra dimension to their raw sound.
description from www.roughtrade.com