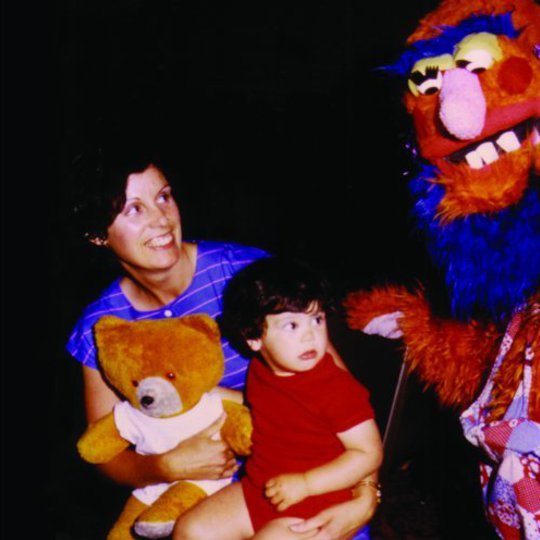 Across nine albums, Misty's Big Adventure have always been happy to glide across the dancehall floor in a series of styles; be it in a tuxedo to lounge piano or hi-tops to a rock steady beat. Over the years, frontman Grandmaster Gareth has led this Birmingham seven-piece with a dour voice, a quick wit and the heart of a hopeless romantic. Like the album’s cover of a kid and mother looking petrified by a costumed entertainer, Misty’s are indeed both scary and loving. At it’s best latest set The Fanily Amusement Centre sets up ballads that could sit on the Beach Boys’ Sunflower before the crew of Psychoville come and scream to camera.

There’s probably no one else making prog-ballad albums. For this Misty’s should be endlessly praised. Whilst the opener ‘Aggression’ starts with their template ska-upbeats and a pondering on why everyone’s in such a grump, there’s a ‘Peaches en Regalia’ noodle to the arrangements that jars humorously and gives the track an elegance.

‘I See A Cloud’ is an example of Gareth and co. at their strongest. True, it’s one of their simplest tunes, but with that one of their most affecting melodies. There’s still four different sections and at least two dramatic tempo changes, from verses that could set the cast of a Gilbert and Sullivan operetta into sway mode, while an upbeat chorus of “I don’t want to be on my own anymore” would have band dancer Erotic Volvo collapsing and needing a hug. The changes and developments are seamless and feel perfectly natural, yet are whimsical, eccentric and frivolous as well.

Performing in Misty’s must be a liberating experience, a twist of prog, jazz and lounge and northern soul with no ulterior motives beyond writing oddly uplifting songs. Ween do this whilst laughing gloriously at everything, The Electric Soft Parade do this and ramp up the distortion and harmonies, but no one does it quite like Misty’s. No one lilts a song like Noël Coward before morphing into a Stereolab song vocal solo – with a child chorus line - as in ‘The Bigger The Front’.

If pushed to assess the ins and outs of progressive music, Misty’s wouldn’t make the Mojo supplement. They aren’t the technicians or the avant-garde. They can’t compete with the Krautockers wiggling on the Old Grey Whistle Test and sometimes the jarring stop into spoken word fails to have an impact, even if it is Sir Patrick Moore enunciating slowly. But when they slowly develop a ballad that’s part nursery rhyme part samba with a three-minute string quartet and multi-tracked saxophone arrangement, as in closer ‘A Long Line Of People’, they do, however, make everything much much better. They should definitely make the Beano annual every year, a far loftier goal for any serious musician and writer.