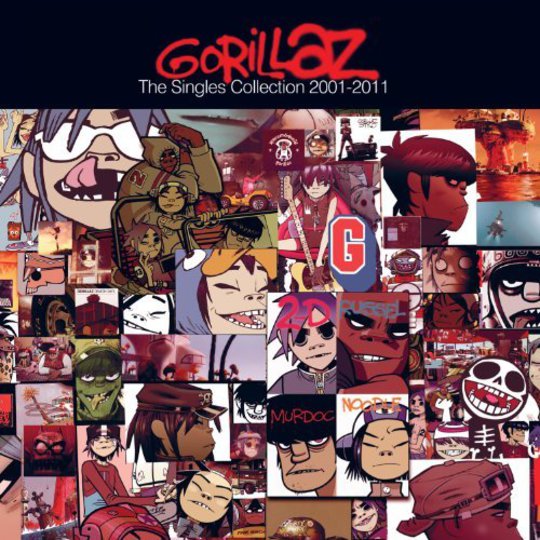 Damon Albarn might as well have been standing alone on stage at Glastonbury last year. Visually fraught and confused by the lacklustre response to a set that’d seen him joined on stage by everyone from Mark E Smith to Lou Reed and Snoop Dogg, his desperate plea to get a crowd – who were in thrall to the gut-hitting nostalgia of his other music 'other band' 12 months previously - to sing along to competent, environmental-themed Plastic Beach album track ‘Pirate Jets’ crashed and burned. Standing tense, fists clenched angrily, eyes goading those he assumed would’ve been his from the off, it was the nadir of a Worthy Farm headline set that’s come to be viewed by many as a failure.

Standing among that milieu at the time though, I couldn’t help but feel at least a part of affectation towards the troubled headliners, a deeper connection as - at this point - the veneer finally fell away from Gorillaz. Albarn’s raw emotion raged against the dying light of his crowd, replacing the wall that first Hewlett’s illustrations and then the slew of superstar collaborations had slowly put up over a decade.

Of course the whole point of a conceptual cartoon band, Albarn and Hewlett had maintained at its beginning in 2001, was to reflect the lack of substance permeating mainstream music at the time - and if Popstars was only the prototype for the all-encompassing machine that would eventually become the X Factor, its winners Hear’Say still sold over a million copies of their debut single. Yet as Albarn slowly emerged from the shadows of his partner’s penned visual creations of Murdoc, 2D, Noodle and Russell Hobbs from 2005 onwards, he came to represent that concept in a manner that became rather more mundane. Indeed, by last year’s Plastic Beach they were starting to resemble something of a musical Harlem Globetrotters with super slick vocal collaborations liberally dolloped over the top of tracks shimmering in production, laid down by a backing band including, as you do, members of The Clash. Bar the wonderful chemistry provided by the collaborations with Little Dragon (none of which were turned into singles so don’t feature here) and, tellingly, those songs that remained sans guests, there was little emotionally to grab onto, the album’s environmental concept sounding as though its narrator was observing his tale from a disinterested distance – much like his Glastonbury audience.

Ok, so put bluntly there’s no reason you really need to own this release if you’re a Gorillaz fan unless you’re desperate for the physical product; but with the track listing placed in chronological order, listening to it does provide proof of the project’s evolution from multi-media experimentalists to a bells-and-whistles-tacked-on hype machine. Where first track ‘Tomorrow Comes Today’ is subtle in its minimal approach, a trudging hip-hop loop underpinning Albarn’s world weary vocal, last year’s ‘Superfast Jellyfish’ features – hey! – De La Soul back for a second cameo after global breakthrough ‘Feel Good Inc.’, and – neat! – Gruff Rhys on hand to provide the chorus, a bright mix that glistens and purrs. Similarly ‘Clint Eastwood’ creeps along at an awkward 84 bpm, strings ascending in their drones and a ‘Once Upon A Time In The West’-style harmonica; it’s an analogical b-movie soundtrack to ‘Stylo’s huge blockbuster of synth and bass bombast (which, to that end, even went so far as to include Bruce Willis in its video) furthered with Bobby Womack’s dramatics.

Given this sonic shift away from more underground influences, it’s incongruous to note that whilst ‘Clint Eastwood’ and its follow up ’19-2000’ both managed to make the UK top 10 – the former amassing almost half a million sales – none of Plastic Beach’s efforts breached the top 40. The singles market has, of course, changed drastically in ten years, and there were other reasons for those singles’ success – Albarn’s stock was still high in the heartland of both indie and pop, with Blur’s 13 two years previous proving to be the band's fourth consecutive platinum-selling number one. Both Gorillaz tracks, meanwhile, were propelled forward with rather more dance floor ready and radio friendly remixes in tow (both included here). Ultimately though, the song craft was simply better, and after the first two albums the focus trailed off once Albarn started treating his open-ended sandbox as a way to hook up with as many cool people as possible, rather than write the songs he’d never have gotten away with in Blur. What became apparent during that Glastonbury performance of 2010 was that the idea of seeing Lou Reed, Snoop Dogg et al on stage was a lot more alluring than the actual eventuality. ‘On Melancholy Hill’s oversight by the general public was criminal, sure, but the two other singles to be released last year are big, clunky and unsatisfactory in spite of their distinguished collaborators. Whilst ‘Rock The House’ has perhaps dated the worst, all the songs here from Gorillaz sound well-balanced between pop sensibilities and explorations towards sounds not too far removed from the dense, nocturnal trip-hop of UNKLE and DJ Shadow’s still-at-the-time hugely influential opening work. They’re songs that – like Radiohead on Kid A – took style lessons from electronic producers and pushed them into wider recognition.

I haven't really touched on the group’s Demon Days era yet, but the five singles here give rise to the notion that it will probably go down as the project’s best period. ‘Feel Good Inc’ was an astute choice as a lead-off release for that LP, and the accompanying videos from Hewlett were his most spectacular visual accompaniment yet, an aide to the sense that the project was moving towards darker territories, a sense of the forlorn and a real addressing of something greater than the void of the pop coming through. ‘Kids With Guns’ and ‘Dirty Harry’ bristle with bite in a way the solemn Gorillaz 1.0 never did. ‘DARE’ in contrast is completely throwaway fun, and for that reason reached number one in the charts and briefly threatened to resurrect the career of Shaun Ryder - no mean feat. ‘El Manana’ however was perhaps their finest though, proving again that Albarn was best when left on his own; its sorrowful ballad possessed offering a rare moment of emotions completely stripped back.

The overriding truth however is that Gorillaz's catalogue standing alone is hard to put in context given that it was the explorations around the music at the time that have caused the fascination with the group – be that the forming concept of their animation-only status, their eventual live appearances in 2005 or the sizeable increase of their famous studio entourage – only on Demon Days did you sense the public’s interest paying equal attention to both music and multimedia alike. The Singles Collection 2001-2011 proves that at times Albarn touched on a warped pop genius, and to his credit comes out of the project with his reputation as creative wanderer intact, but from the off the constructed barrier meant that there was always little to really love, songs hidden too much behind their glitteringly presented shells. Going back to that moment at Glastonbury, as the now 43-year-old ranted and pleaded to his uninterested crowd, it was perhaps here that he too came to that realisation.