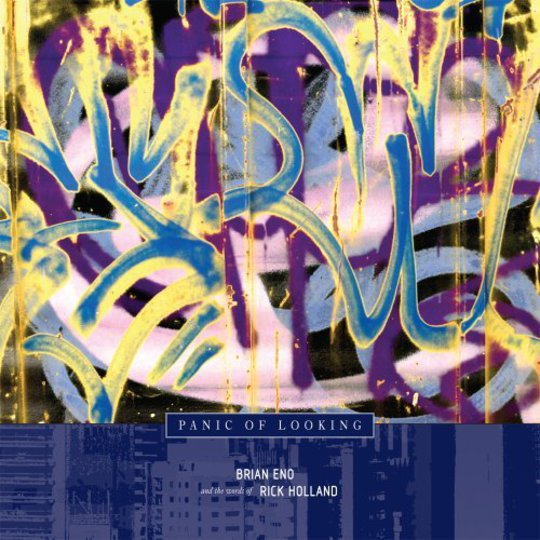 Having now met a portion of the DiS community I get the feeling that the majority of readers and writers on this site are, shall we say, a little bit geeky, and as such probably don’t need the concept of the technological singularity explaining to them in great depth. Still, I had to take a trip to Wikipedia to remind myself, so it’s probably worth a brief recap that said singularity concerns the 'hypothetical future emergence of greater-than-human intelligence through technological means. Since the capabilities of such intelligence would be difficult for an unaided human mind to comprehend, the occurrence of a technological singularity is seen as an intellectual event horizon, beyond which the future becomes difficult to understand or predict.'

Happily, this above sentence could conceivably be a lyric from the new Brian Eno EP Panic of Looking, whilst also serving as a passable allegory for this stage of his career. After all, Eno spent much of the Eighties creating music that sounded like a soundtrack for Kubrick’s HAL to get stoned to in the (then) distant future, so it’s probably a little unfair to expect him to pull magic from the stars as he continues to gaze into them 30 years down the road; though if stargazing seems a little too closely linked to astrology and intangible pseudoscience, then poet Rick Holland’s contribution to their second joint venture this year is far more grounded in reality... but more on that later.

For gaze into the stars Eno certainly does. With minimalist electronica backing ominous vocals, this brief record at times comes across as less an EP and more a Seventies PSA broadcast from the moon; or perhaps an episode of Threads. It sounds almost painfully high-brow and, after spending a day with Radio 2 on in the background, I feel like a woefully underqualified thicko when trying to decide whether or not this actually makes it any good.

The EP serves as a companion piece to Drums Between the Bells, the LP that came out on Warp earlier this year. That first collaboration with Holland was a disjointed affair, its changes of direction as severe and angular as anything in Eno’s back catalogue. It was a record that may have had its foundations in the poet’s lyrics, but it was the percussion with which Eno decorated the likes of ‘Glitch’ that meant Drums Between the Bells’s ominous ambience was exciting and fearful rather than simply bleak. The juxtaposition between pulsating murkiness and snowy, transcendent prettiness was not universally praised, but when you’re making music as challenging as Eno does (Coldplay et al notwithstanding) then such shifts in tone keep the interests of those of us who have drifted in and out of more university lectures than we care to remember.

So what of the more straightforward-yet-delicate younger sibling EP? Unfortunately after much soul searching I am unable to find any in this record. Instead the music is so sparse, so distant and disconnected that it loses any sense of humanity, and as such fails to raise anything resembling empathy. There’s nothing wrong with going for the ethereal, the oblique or the cool, but it would take a disposition far icier than that of this fragile writer to be moved by such a mechanical record as this.

The sense of remoteness is not helped by being juxtaposed with Rich Holland's spoken word contributions. An interesting performance from a singer may well have saved the likes of opener ‘In the Future’ or the title track, but instead it is oh so solemn; lines are at once impenetrable yet spoken with perfect diction, like they’re being read to you by a Futurama caricature of Alan Yentob. HAL may have been a groundbreaking, inspiring villain, but he ceased to be scary and passed on into the world of parody many years ago, and had he been conceived today would really just seem a bit silly.

The other grievance I have with Panic of Looking is that it is a mere fraction over 16 minutes long, and costs £3.49 on iTunes. This may not sound a lot but, given that there is a note played approximately once every four and a half minutes on this EP, it often feels like you’re paying £1 every time Eno presses a key. Yes these notes may occasionally be pretty, and delicate, but for that kind of money you expect something spectacular and groundbreaking, something either heart-wrenching or extravagantly euphoric. What you really have is a record with all the spirit of Microsoft Excel.