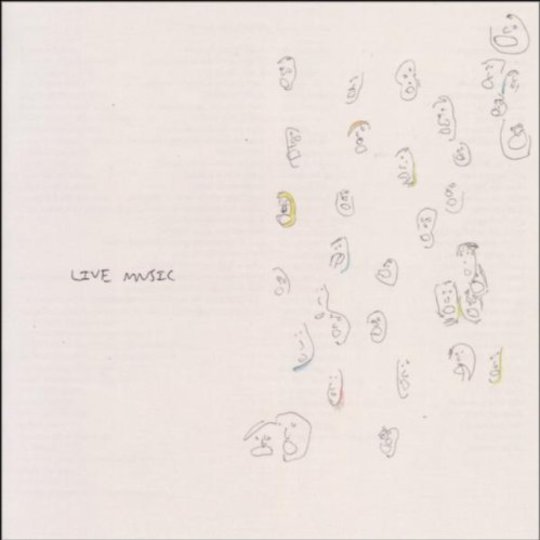 Arriving at an understanding of a band is obviously something that happens in stages. There is, of course, always the music to listen to. But there is so much else that contextualises the music and sometimes the music alone is not enough. Or not good enough. On first listen, Live Music (as in, ‘live the music… man’ – I know this because I heard Lauren Laverne say it on her 6Music show. And because it’s written in their press release. But the press release is a whole other story) sounds a bit like The Libertines. Well, it sounds a lot like The Libertines. And it’s on Rough Trade. I know this because the Rough Trade logo caught my eye when I took the CD out of the jewel case and even with my limited knowledge of The Libertines, I know that they were on Rough Trade.

So that’s that, then. Strange Boys, Libertines, Rough Trade, got this one nailed. Not gonna like ‘em. Not my bag. No sir. Getting ready for mildly scathing review. Witty comments to the fore!

Then the unthinkable happens. The press release sort of… leaps out from under the jewel case and scuttles across the duvet. Unfolds itself. Positions itself in front of my eyes. The rule is: no press release until AFTER the review. And even then it’s for factual content only. But, see, this one had some real powerful, opinion-destroying facts in it. And a photo. A full-colour preceonception-shattering photo. So, apparently, you see, Jenna Thornhill-De Witt plays saxophone on the Strange Boys album. You know – her out of Mika Miko. TOTALLY my bag.

And they don’t look like the kind of band that Topman would ever use as inspiration for an entire three seasons of varying designs of military coats. And actually, you know what, now we’re on to the second listen, maybe they don’t sound soooo much like The Libertines, after all.

In fact, there is an essence, a spirit, that I can totally trace to loads of bands I love. There’s that whole ‘Jack Daniels at 5am’ vibe going on, a bunch of raggedy-looking men clubbed round a piano smoking the last of some stranger’s cigarettes… that vibe you get listening to Nikki Sudden’s albums, or The Flaming Stars. Guitars that sound like they are played through amps full of dust, fag butts and cigarette papers with beautiful girls’ phones numbers scrawled on them in lipstick.

Live Music is a game of two halves, chronologically inverted; the first half – audibly crisper and more polished – was recorded in April 2011 in Texas and the second half, four months earlier in California. Though the second half sounds more like a live rehearsal recording than its predecessor, they both are possessing of equal charm. ‘Over the River and Through The Woulds’ sounds like something Conor Oberst would churn out with his Mystic Valley Band, heartbroken and ragged, preoccupied with mortality and despair: “You can always get another dog / but you can’t choose when it dies.”

Essentially, if you like the sound of men that sound like they drink a lot and make a lot of bad decisions in life, have people die around them and then like to sing about it, set to a raucous soundtrack of guitars, drums and piano... then Strange Boys are pretty adept at all of those things. And you know, if you like The Libertines, you’ll probably like them too. Just don’t expect much in the way of sartorial influence.