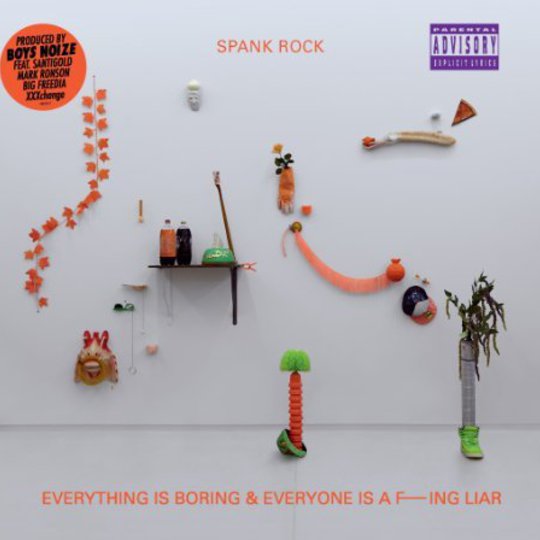 Popular culture hit a singular nadir earlier this year when Snoop Dogg hired landfill trance house and generally objectionable French producer David Guetta to produce a track for him. I’ll spare the exact details, suffice to say it was not a great advert for hip-hop’s latest productive fetish for ‘dance’ music.

Thus, the news that Naeem Juwon, better known as the mouthier half of Spank Rock, had hired Berlin electro titan Boys Noize to handle the majority of production work on his long awaited second record, may have prompted many an involuntary shudder. Guetta-isation in full effect. Of course, Alexander Ridha is a producer of greater critical pedigree than the lank haired Frenchman, but given that Spank Rock’s first full length, aural party grenade YoYoYoYoYo, was a delightfully produced melting pot of motown, funk, electro and b-more club, it seemed a dubious choice at the time.

Album taster ‘Energy’ put many of those fears to bed. Taking the infectious circular rhythm section loop from Can’s ‘Vitamin C’ and fattening it out with a brassy chorus could hardly have been more unexpected, especially given that Juwon shows that he can croon and howl with the best of them, rather than just twisting his tongue around his usual lascivious wordplay.

Reproduced on the album itself, it’s tacked on the end; an oddball outlier on a record full of oddball outliers. Everything is Boring and Everyone is a Fucking Liar (there’s a reason I’ll only type that out two times in this review) goes from barely disguised hush hush sleaze (‘Ta Da’) to chart-bothering crossover rap (‘Car Song’ featuring a cooing cameo from Spank associate Santigold), to wrecking ball electro (‘The Dance’) to the downright bizarre (‘Baby’), touching almost everything in between. Part of the blame can be laid at the feet of the many producers brought in to help out: Mark Ronson, N.A.S.A and Tyler Pope of !!! also get writing credits alongside XXXchange and Boys Noize.

While YoYoYoYoYo was hardly an exercise in uniformity, the sheer array of styles on display here are mildly bewildering. At times experimentation takes a front seat to quality: take ‘Baby’, which features Spank doing his very best bad Lenny Kravitz impression and just has to be some sort of serious in-joke. Similarly, ‘#1 Hit’ might start off promisingly, Juwon wrapping his lips around an autotuned “I can make you famous” refrain, but the introduction of some squelchy sounding synths and a truly awful chorus which doesn’t bear describing quickly turn it sour. That particular horror aside, it’s immediately apparent that this is much more of a dance record. Ridha’s production is true to type, at times sleazier and dirtier; but always blockier, more aggressive and more in your face than what came before. Frequently vocal refrains and torrid breakbeats dominate tracks, which are interspersed with; rather than overlaid with, the rapid-fire wordplay that made YoYoYoYoYo such a cult record.

Maybe it’s for that reason that new Spank definitely sounds best when it reminds you most of old Spank. ‘Nasty’ is a prime cut, remplete with a come-on chorus (You nas-ty, you nas-ty) and rapid fire filth; “put your legs up on the wall/hands down on the ground/bend over the woofer/let the bass rub you down”, before finally turning into a hyperventilating, rump-shaking bounce anthem. ‘Race Riot’ rides the best tuba riff heard on a hip-hop track since Chad Hugo provided Mos Def with ‘Twilight Speedball’, pairing it with a typically infectious and stutteringly obscene chorus which shouts out to every race of woman on the planet; “Shake it ‘til my dick turn racist / Shake it ‘til my dick turn racist”.

One of the oft-repeated criticisms of Spank Rock has been their, um, one track minds: to this reviewer’s mind that was never really a problem. The unashamed smuttiness was so brazenly constructed that the effect was to make the listener grin rather than recoil in horror (Personal favourite 'Touch Me': “One on the futon/ one in the shower/one in the backseat/three this past hour/One in the balcony/ two on the dance floor I need to sit/I can't stand no more”). This time round, Juwon’s toned it down, or at least contrasted the smut with some other lyrical offerings. Not that he’s turned introspective, but there’s a definite attempt to prove that good clean fun isn’t beyond him. The irony is that clever couplets like “I took New York like Cloverville / now I wanna go West like Kanye / I was thinkin’ more like Cornell” merely serve to highlight just how good Juwon is when he’s non-PC: “Just two tits in a bra/ just two lips on my balls/ boom bitch / you’d strip for a blog”. As it happens, the listener is left craving a little more filthy wordplay, and a little less production wizardry.

Because as with so many records, the first impression is also the last impression. Listening to Everything is Boring and Everyone is a Fucking Liar back to back with YoYoYoYoYo, it’s clear that the lack of cohesion and continuity on the former is missed just as much as the lack of production subtlety. It’s a bold, brash, varied, slightly confused dance record with flashes of hip-hop. But what also comes across is that Spank Rock probably couldn’t make a boring record if they tried. If they did they’d be lying to us and themselves. “Dancing feels…better this way…so much better this way”.