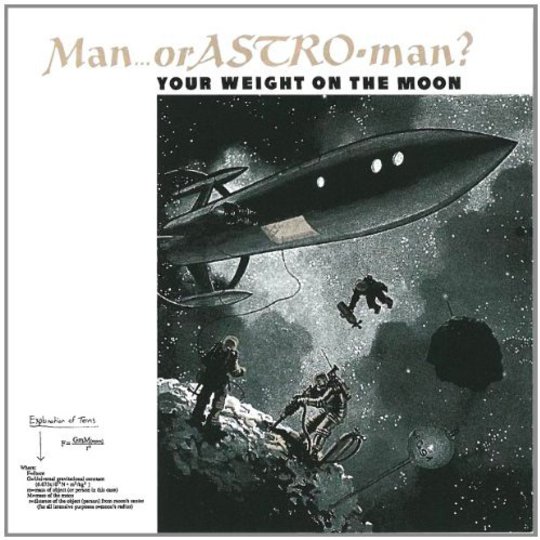 If not literally a pre-internet band in their imagery, Man… Or Astro-Man? are at least a pre-Google one. Based in Alabama, they formed in 1992 and released their debut single, the first of 30 or so, that same year. Their shtick was to pretend to be from space, conveyed by playing Sixties-style instrumental surf rock with added Theremins and oscillators and the like; preceding songs with samples of obscure sci-fi B or C-movies from the same decade or earlier; wearing helmets and silver lab coats onstage and never revealing their real names. Compared to, say, The Residents or contemporary Swedish occultists Ghost, MOAM?’s attempts at obfuscation were decidedly unstrenuous – the American DIY circuit which they toured the crap out of doesn’t exactly afford much opportunity to hide away from your rabid fanbase until showtime.

Accordingly, by the time Your Weight On The Moon was released in late ’94, people were starting to play along with the trio (real names Brian, Brian and Robert) in greater numbers, helped in the UK at least by Peel and Radcliffe rinsing their album tracks. According to a review from the time, reprinted in the booklet of this expanded CD reissue, around 40 labels attempted to sign MOAM?, including some majors. They acted as if nothing had happened and stuck with One Louder, a small-scale imprint from Newcastle. Although they were encumbered by hype, especially around the time of their ’95 UK tour, it seems like it was easier for a sensible band to shrug it off than is the case now – hey, if a gaggle of faceless blowhards slag you off, it’s unlikely to be in a forum you can easily read. They never really suffered a backlash, continued to be warmly regarded even when graduating to larger labels (Touch And Go and Epitaph Europe), and their sporadic live shows in the last 18 months have elicited hope that they might visit the UK next year.

For now, sate yourself with three MOAM? releases – the ten-song Your Weight On The Moon, ‘93’s Mission Into Chaos! seven-inch and Return To Chaos, another single from 1995 – on one 45-minute disc. Although the band would switch their style up later in the decade, bussing in synths and generally becoming more, uh, soundscapey, at this point they were working with intentionally narrow parameters. As such, there’s nothing to really differentiate any of the three records from the others, but this doesn’t weigh the whole down: songs average just over two minutes and don’t appear to be arranged in any greatly meaningful order, so you can listen to as much or as little as you like, or just blithely hit random play.

Rest assured, too, that Man… Or Astro-Man? were masters of their chosen genre. No doubt there were surf-rock obsessives who groused 'gimmick' at the time, but their gimmicks were always addendums to the music, rather than an attempt to mask deficiencies. More often than not, a song would start with a sample of some presumably terrible old movie or the sort of educational film you could imagine Troy McLure narrating; marvellously, albeit in a way reinforcing my point at the start of the review, there’s a website which attempts to identify every MOAM? sample. Despite being recorded in one day (my fourteenth birthday, fact ‘fans’), Your Weight… is punchy and precise, and manages to prize authenticity while taking advantage of decent audio and big ol’ amps. They clearly knew their Dick Dale, Davie Allen, Link Wray and Surfaris jams, as well as more obscure one-offs like Zorba & The Greeks, whose ‘Shockwave’ is covered here (ditto The Rezillos’ ‘Destination Venus’, the only song to feature vocals, and John Barry’s Goldfinger theme). However, they also pack enough heft, especially in the thumping drums of Birdstuff, to make you think there might be an attempt to bring surf-influenced punk bands like Dead Kennedys, Agent Orange and JFA full circle with their progenitors.

I could make a vain attempt here to pinpoint Man… Or Astro-Man?’s relevance to anything happening in 2011, but while they might have been a partial influence on, say, Y Niwl and the Night Birds, it would be spurious. It’s not like Your Weight On The Moon had anything to do with the sound of 1994, after all – at least, not until enough people clambered aboard and made the band known as a hootsome live draw. For now, it’s neat and justified that these records are back in print.