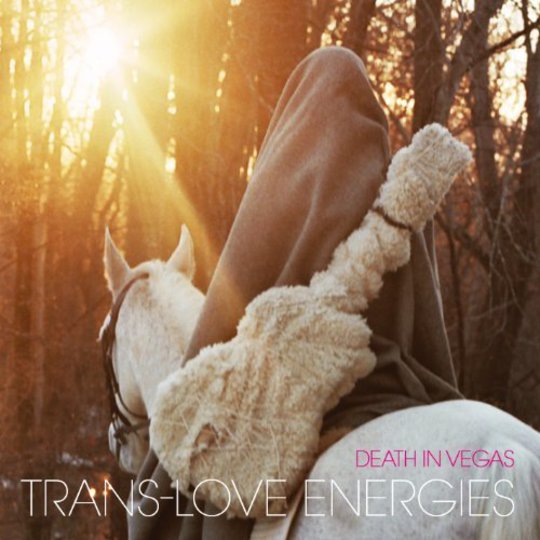 Extended lengths of time between creative periods tend to go one of two ways. Sometimes they allow the artist time to breathe, to take on new perspectives and gain new experiences: and fans of Kate Bush and Gil Scott Heron will rightly tell you that this allow the artist to return stronger than ever; that the artist has never sounded so inspired, so fresh and so creative. On the other hand there are the likes of Guns‘N Roses or author George R.R. Martin, whose fallow periods left them creatively bereft and stale, often with a vast mess of impenetrable ideas: talking a lot but not saying anything, as Talking Heads might put it.

Trans Love Energies, the new album from Death in Vegas, errs towards if not falls firmly into the former category. In many ways it is a throwback to a time even before their third record, 2002’s Scorpio Rising. Songs on that album such as title track ‘Scorpio Rising’ or the mesmerising ‘Girls’ (used to such perfect effect in Sofia Coppola’s Lost in Translation) arguably sound more contemporary in 2011 than many of the spacey, breathy computer sounds on this latest offering. Trans-Love Energies lead single ‘Your Loft, My Acid’, for example, is reminiscent of the early Nineties dance tracks that partly inspired Radiohead on OK Computer; it is telling that the computer noises on that great album are the most dated sounded thing about it, and there was probably little need for producer/songwriter/frontman Richard Fearless to emulate them here.

ZX Spectrum issues aside, Trans-Love Energies is a quite wonderful album. With guest vocalist Kate Stelmanis in tow, the band explores a veritable smorgasbord of genres, underpinning each with their signature brand of darkly tinged electronica. Opening track ‘Silver Time Machine’ is a shadowy, swirling track that beautifully juxtaposes classical acoustic guitars with the noise of what sounds like howling space winds hurtling across a desolate moonscape (if, like me, this puts images of the film Armageddon in your head I apologise profusely). ‘Medication’ and ‘Coum’, on the other hand, show Death in Vegas at their funkiest, with the contrasting combination of a chugging underpinning beat, proggy keys and drugged-up vocals echoing early TV on the Radio. These two tracks, building on each other, nicely precede the second half of the album’s change of direction, with ‘Witch Dance’ signalling a switch to a busier, more dramatic soundscape.

The album’s high point however is second track ‘Black Hole’. Segueing seamlessly from ‘Silver Time Machine’, the introduction of distorted My Bloody Valentine-esque guitars and a pained, nasal vocal that impressively doesn’t even begin to grate give the track a kind of subdued urgency. It’s a heavy rock track played underwater, worlds removed from the songs either side of it and yet not sounding a note out of place.

Often in the world of electronic music there is desperation to create a wall of sound, cramming in a huge number of beats and loops to help songs surge and elate a crowded Shoreditch/Brooklyn nightclub. It’s a sound that is hard to get right, as by nature it leads to songs and albums sounding turgid. With Trans Love Energies, Death in Vegas do well to avoid such pitfalls, instead creating an album that is musically and thematically filled with space, both roomy and outer. Ironically it is also an album that Fearless allows to breathe, leaving gaps in the music for his ethereal noises to grow into. It’s a nice touch, and again a throwback to an unfashionable era for electronica, but one that allows them to create a strange kind of beauty out of their trademark darkness.