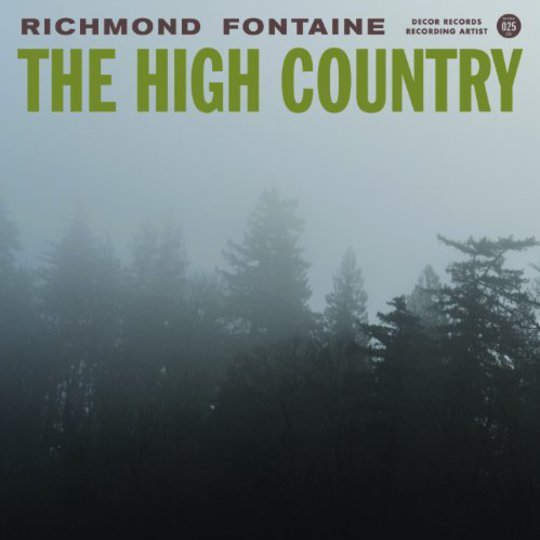 When a band comes to the tenth album in their career, it’s not surprising to see them try something different. You certainly can’t accuse Richmond Fontaine of resting on their laurels. They’ve always based their songs around a literate, sparse alt-country sound, brushed with elements of other genres, or with the touch of collaborators such as Howe Gelb and Calexico. Their last LP, We Used To Think The Freeway Sounded Like A River, captured this approach perfectly, tying everything together with mainman Willy Vlautin’s eye for a story.

Of course it helps when you’ve got someone like Vlautin at the helm, a man who’s had three novels published outside of his day job. With a special talent for capturing the lives of America’s low down and dispossessed, Vlautin has been praised from all quarters for his minimalist way with words.

You can see then, how they’ve ended up with the idea behind The High Country, which is proclaimed as a ‘song novel’, with a narrative thread running throughout, spoken word excerpts and clear characters. That’s the idea anyway. As lovely an album as it is, it doesn’t quite tie together as much as Vlautin’s more traditional works of fiction.

Of course, many people have attempted concept albums and narrative threads throughout a record, and some have been successful, the key being that whatever the concept, it shouldn’t get in the way of the music. All good records should be vague enough to make the listener think that it relates to their life, and in the past Richmond Fontaine have nailed this perfectly.

Career highlight Post To Wire was all about a clutch of particular characters, but the listener could hear parts of themselves in the careworn tracks. Here on The High Country, you can just hear the tale of Claude and the girl from the autoparts store, and it’s difficult to feel involved with what they’re going through.

Musically though, The High Country is a fantastic sounding LP. With the strong presence of Deborah Kelly as the female contrast to Vlautin’s gruff tones, tracks such as ‘Let Me Dream of The High Country’ and ‘The Eagles Lodge’ drift languidly from sparse openings into lush, cinematic soundscapes full of strings and slide guitar. Another of Vlautin’s past innovative ideas was an instrumental album that accompanied his book Northline, and many of the tracks here recall the hazy atmosphere captured on that disc. Melodies reappear from track to track, blending into one another and developing organically, traditional verse-chorus-verse structure forsaken to benefit the narrative.

Sitting next to these tracks are some edgier numbers that recall Richmond Fontaine’s garage origins. Standalone track ‘Lost In The Trees’, which forsakes the main story for a tale of drugs in the woods, careens around on a rollocking beat and an angsty, restless riff. It’s probably the best thing on the album.

As an album, The High Country is a little disappointing, as fans of Richmond Fontaine might wish for something a little more traditional in the structure, or at least for the story idea to have been realised better. It’s certainly not helped by some of the hammiest acting ever committed to tape. However, you’ve got to admire the band’s ambition and, if you ignore the plotline, there’s still plenty of enjoyment to be found in The High Country.