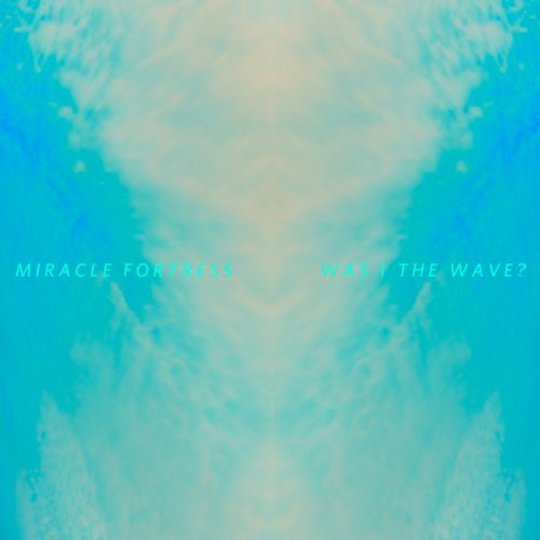 Was I The Wave? could be defined in many different ways. Sparkling, uplifting, comforting. Zoom out a bit, and it is dense, Eno-esque pop. Consider it all at once and it becomes pure loveliness.

Yes, there’s a lot to like about Miracle Fortress’ second album. Moving away from the sun-bleached, homespun pop of Five Roses, Graham Van Pelt’s latest record is less tethered, more willing to soar and glide.

The cover of Was I The Wave? features a symmetrical image of a cloudy, blue-drenched sky. ‘Awe’, the spacey, shimmering opening track, drops you right in those clouds, a hazy, pleasant space that stretches out before you. Lonely, twanging guitar (think Radiohead’s ‘Hunting Bears’) and menacing synth swells soon roll in, adding a paranoid edge. Then the album begins for real.

Second track ‘Tracers’, is excellent, exacting musicianship, one of several more grounded songs that keep the album from veering into abstract ambience. It builds slowly, swelling gently, with a foundation of tightly-coiled guitar arpeggios. Track three, ‘Raw Spectacle’, is where the album starts to lift off into the sky, a synth-washed marathon, cleansing in its sheer scope.

Was I The Wave? is varied and meticulously-crafted and while I’d say it’s a regularly disproved myth that the album format is dying, it’s nonetheless always welcoming to find an artist who takes the format seriously enough to properly consider pace and sequencing. This album has peaks, troughs, swells and stretches. It has luxuriously airy, Boards of Canada-esque interludes. It has an intro and an outro. It even has two sides.

Indeed, with its lovely cover art, a production style that would certainly wouldn't suffer for the odd crackle, and its two-sided structure, this is an album seemingly made for vinyl. The two halves are particularly interesting, being a structuring style that, by and large, died out with the advent of CDs. Nevertheless, here we are. The two sides aren’t vastly different, but there is a subtle, yet noticeable change in tone between the two halves. Tracks six to ten are rather more sparse and contemplative, while the sweet rush of the first half suggests an opus that never quite arrives.

That isn’t really a criticism: on the first few listens it can be disappointing that the celestial pop epic hinted at early on (particularly in the wonderful ‘Raw Spectacle’) never materialises, but to complain is to miss the point. Looking for the quick rush means overlooking the album’s myriad hidden charms. Some of the quieter moments here are the most arresting, like the dusty whirr of interlude ‘Before’, or the utterly relaxed closer ‘Until’, a welcome bit of languid noodling from Van Pelt after the fastidious guitar work of the previous nine tracks.

One way to look at Was I The Wave? is as a record that brushes the clouds but never quite breaks through to the stars. But even if you’re only up in the clouds, the view is still pretty gorgeous.