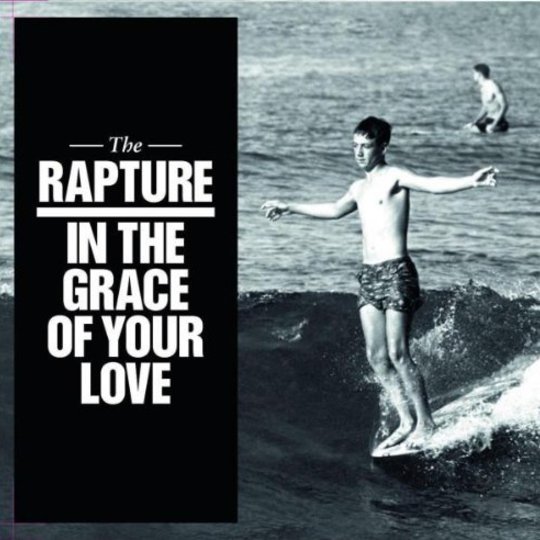 Ten years and four months ago a little-known band released an EP called Out Of The Races and Onto The Tracks. On its cover was a quickly drawn outline of North America showing two arrows speeding across the country and converging on their home-town. New York, May 2001. If this was The Rapture’s visual shorthand for ‘hey world, keep your eye on this place!’ then they could hardly have been more prescient. The EP was produced by the newly established Death From Above label, six tracks defibrillating the post-punk grooves of the early Eighties and jump-starting them for a new generation. Sure Luke Jenner’s voice frequently sounded like a cat pissing up a wall and half the songs fall apart before they’re finished, but if you’re looking for technical accuracy you can look elsewhere.

Two years later and ‘House of Jealous Lovers’ is the fourth single to be released on the DFA label proper; and thus it begins. The Great Blizzard of mid-Noughties punk-funk. The likes of Out Hud, Hot Hot Heat, Radio 4, !!! all produce fine albums, but none to rival the sheer elegance and essentiality of The Rapture’s near-perfect debut Echoes. Then came the obviously-not-as-good-but-still-pretty-good follow up three years later, and then The Rapture dropped off the map forever right? Nope. In The Grace Of Your Love is a bit of a surprise for everyone concerned. After bassist Mattie Safer left to pursue The World’s Least Successful Solo Career ™ singer Luke Jenner sort of left, then decided to come back after all, and now, presumably after grovelling for forgiveness from his two remaining band-members, The Rapture is alive and well.

Or at least, in places they are. If you’ve heard lead single ‘How Deep Is Your Love?’ you’ll know it’s an absolute banger. On my first listen I was quite happy for it to bob along on the Nineties house piano-riff, then that devastating bassline drops like a cartoon anvil and I half expected streamers to start pouring from my roof. Elsewhere track four, ‘Come Back To Me’, is easily one of The Rapture’s most accomplished and idiosyncratic songs yet. Their NYC roots are nowhere to be heard as filtered French accordion ducks in and out of a heavily compressed beat. It’s a sticky, seductive dancefloor-filler until it abruptly stops in a haze of reverb and in comes this brooding, minimal sub-bass. The effect is show-stopping, or at least it would be if it didn’t serve as a vivid reminder of how pallid the rest of the album is in comparison.

You see, there’s just something not quite right about In The Grace Of Your Love. Sure, it's 2011 and the last punk-funk bandwagon drove out of town about five years ago, but it's not that. Indeed, they’ve clearly grown and matured, exploring far more musical avenues than ever before this time round. Except, writing that sentence an enormous alarm bell starts ringing in my head - who the hell ever wanted a more mature Rapture?

Perhaps that’s the eternal punk-band problem; when context is everything, the glory can only be ephemeral, and on this basis it's questionable whether The Rapture have the artistry or depth to pull off an ambitiously sprawling album such as this without it falling flat. Much has been made of their return to DFA, but this label is about as meaningful as a Marco Pierre White label on a jar of cooking sauce. DFA are promoting and distributing it, but they had no creative hand in the process - the production duty falls to Phillipe Zdar of Cassius.

The results are songs like widescreen opener ‘Sail Away’, which explodes in an epic crescendo after a mere 17 seconds. It’s almost reminiscent of Arcade Fire, except it’s just a puzzling outburst of over-produced noise without any real sentiment or emotion. Luke Jenner’s post-punk squawk sounds strangely out-of-place, and that’s before we get to the inexplicable two minute Rick Wakeman outro where colossal landscapes of synth just sort of, exist, before billowing out into the horizon.

Then there’s ‘Blue Bird’, a completely flat and lamentable psych-garage number which sounds frighteningly like the work of Craig Nicholls. And ‘Roller Coaster’, another inert, vaguely psychedelic car-crash of nothingness. These are songs that sound like they’ve been made at six-month intervals by a band who have lost all semblance of identity, and most hover precariously between being ‘satisfactory’ and ‘terrifyingly shit.’ Take ‘Children’ for instance, a cheesy jangle-fest that sounds like it might have been shortlisted to soundtrack a Vodafone advert about seven years ago. Have The Rapture heard any new music in the last five years? What is this? In places it’s as if the bassist from The Sunshine Underground has started a band – it’s just so glaringly inessential.

And that’s the main problem here. Some of the songs like ‘Miss You’ and ‘In The Grace of Your Love’ have genuinely good moments and are enjoyable whilst they last. However, it’s hard to escape the feeling that this is a band struggling to define themselves in a musical context that no longer needs them. ‘Nothing keeps. There is one law in the universe: NOW’ wrote Alfred Sutro. For The Rapture in 2011, this might seem painfully true.