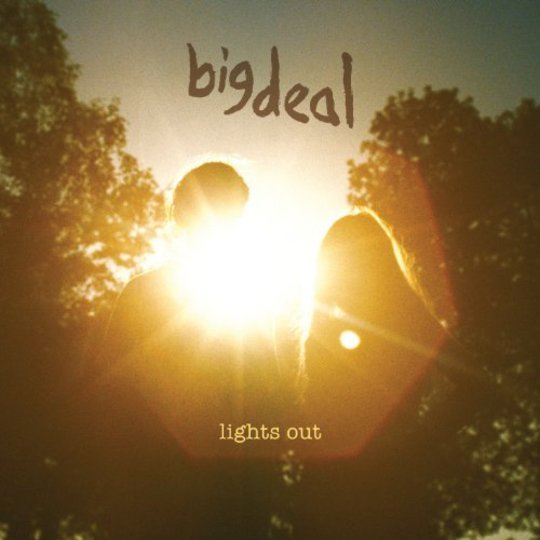 Big Deal are by all appearances a precocious young boy/girl duo a la Summer Camp/Tennis/Cults/Slow Club. In press photos you'd be hard pressed to spot the 11 year age gap between 29-year-old American Kacey Underwood and 18-year-old Brit Alice Costelloe and photogenic they are too, with the sort awkwardly scruffy good looks that tend to automatically attract accusations of hipsterdom from more cynical quarters. At a cursory listen the most apt comparison would be our very own Slow Club, but with marginally less of the indie-folk tweeness and a hint of the kind of post-grunge slackerdom revivalism of Yuck. This is unsurprising given that one of the duo's first meeting involved the Underwood teaching Costelloe Sonic Youth and Dinosaur Jr songs. Nonetheless, the distorted electric guitar provides hazy accompaniment to the acoustic strumming rather than a undercurrent of slacker attitude, creating a welcoming cosiness, more summer mornings between the sheets in the bedroom than plaid clad jams in the basement. Equally essential to this intimacy (and distinguishing them from their contemporaries) is Lights Out's complete absence of a rhythm section; indeed it sounds very much like a record that was conceived, written and recorded in a genuine bedroom, rather than the sort of bedroom studio where you can squeeze a drumkit in between the tallboy and the bedside cabinet.

Single 'Chair' makes its own references to bedroom furnishings and raises the old 'are they/aren't they?' question seemingly inevitable with any boy/girl duo. The chorus of “You don't trust me to sit on your bed, put me on a chair in the corner instead” hints at restrained sexual longings which are made explicit in the subsequent “Want to be your lover, trying hard to be your friend”. For those to whom the age gap is such a matter of interest, lines such as “You're so sweet and you keep me that way” will only add fuel to the fire of intrigue. The fact that Costelloe and Underwood are usually singing in unison (like Slow Club as opposed to, for example, The XX) suggests that the each member's lyrics aren't neccessarily directed towards their musical other half. Nonetheless the sentiments of following track 'Cool Like Kurt' (“Take me to your bed, don't take me home, I want to be old, I want to be older”) pick up where 'Chair' left-off lyrically and musically, both boasting memorable choruses but the latter track final chorus more affecting for its plaintive key change.

This tender intimacy is key to the success of Lights Out. Although playing it straight both melodically and sonically Big Deal are adept at evoking youthful anxieties in earnest without being angsty or cloying. Perhaps this is the advantage of having one member for whom teenhood is still fresh and another for whom it is a semi-distant memory, but the themes and emotions that Big Deal, erm, deal with certainly sit closer to Costelloe's age group than Underwood’s. Case in point, see 'Homework', a tale of romantic anguish and academic failure set to gorgeous lithe finger-picking. On 'Talk' youth is a source of reassurance, the duo insisting “It's ok I'm just a kid...I'll get over it” over chugging distorted chords. The flushes of first love are evident in the cascading notes of the appropriately titled 'Swoon' (“Come and find me dizzy with spell of our chemistry/You are a diamond that fits into my heart so easily”) and on 'Summer Cold' (“Your smile, oh it weakens my knees”) which recalls Siamese Dream-era Smashing Pumpkins at their most wistful and gentle, late summer light refracting through the bending notes of its spindly guitar.

Lights Out works with a limited musical palette so it's perhaps unsurprising that things get a little bit samey; 'Visions of You' is perfectly passable dream-pop, but whereas the aforementioned 'Swoon' and 'Talk' have the hooks, being two songs which would benefit from drums the arrangements feel oddly incomplete. On the other hand 'With the World At My Feet' has the anthemic quality to match its title and the lack of a rhythm section maintains a restrained poise. It's at once stirring and intimate. Similarly penultimate track 'Seraphine' doesn't suffer for the lack of drums, the brooding verses and stormy choruses providing melodrama enough.

Perhaps the highest praise of Lights Out is that it portrays the gamut of romantic and sexual longings and emotions of adolescence with the honesty that you would expect from someone who recently experienced them, but with poise, melodic nous and a musical maturity that doesn't forsake youthful vitality.