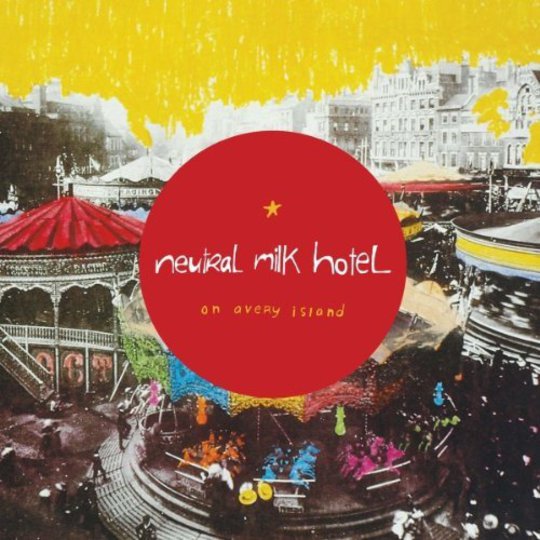 It’s now 15 years since the original release of Neutral Milk Hotel’s first record and to mark this event, as well as to promote the remarkable re-emergence of Neutral Milk Hotel’s main man Jeff Mangum into the indie limelight (he will be both playing at curating ATP later this year, not bad for someone who has been a full time recluse for more than a decade) Fire Records are giving On Avery Island the reissue treatment.

First things first: this is not a deluxe three disc special edition reissue with remixed or remastered sound. There are only two bonus tracks, ‘Everything Is…’ and ‘Snow Song Pt. 1’, and both of those have been appearing on UK editions of this record for years. If you already own this record your only incentive for purchasing the reissue is the fact that it’s being pressed on yellow and red vinyl and comes with a new sleeve and a 24 page ‘poster booklet’. As Fire Records don’t see fit to share the ‘poster booklet’ or indeed the new sleeve with the humble online reviewer then the following comments refer simply to the record itself.

Having said all that, On Avery Island does seem to be a sensible choice for a re-issue, enhanced or otherwise. Neutral Milk Hotel’s second (and, thus far, final) record , In The Aeroplane Over The Sea, has had such a huge cult following from adoring fans proclaiming it to be one of the greatest records ever made that its younger brother, On Avery Island, often gets totally overlooked.

A few spins of On Avery Island are enough to make you realise how unfair this overlooking might be. The younger brother might not quite have the good looks and strapping muscles of his older sibling but there’s a significant family similarity and besides which he has more than enough charms of his own. This is demonstrated immediately on opener ‘Song Against Sex’ which crashes from the speakers in a froth of fuzzed out guitars, horns and earnest yet dream-like vocals. The sound, remastered or not, is perfect, managing as it does to pull off the tricky balancing act of sounding lo-fi and intimate and yet dynamic and full at the same time.

One of the strengths of On Avery Island is the pacing and variety of the tracks. There are slower tracks, such as the quiet and yearning ‘Babies for Pree’, yet these are broken up by louder fuller tracks such as ‘Marching Theme’ and so the record rarely drags and always has something new to engage the ears.

There’s a sense of fun and a definite evocation of a carnival throughout the record, not just from the artwork but the sounds such as the brass in ‘Avery Island/ April 1st’ or the way that the plaintive ‘Where You’ll Find Me Now’ ends inexplicably with ice-cream van chimes. When Mangum evokes a carnival he doesn’t do so in a sinister Tom Waits way, but in a way that sounds like a celebration of faded grandeur.

Mangum’s lyrics are a real strength of this record and, though there’s no real overarching theme as there is in Aeroplane, there are little gems of imagery that stand out from each listen (many of them dealing with death in a fairly playful way): “We ride rollercoasters into the ocean / We feel no emotion / As we spiral down”.

Do you need this re-issue? Well, if you already own On Avery Island then no: there’s nothing here that you haven’t heard before. However, if you’re a fan of Aeroplane but you’ve never checked out the first Neutral Milk Hotel record, or if you’re a completist who fancies a new piece of shiny coloured vinyl, then this is the perfect summer purchase for you.