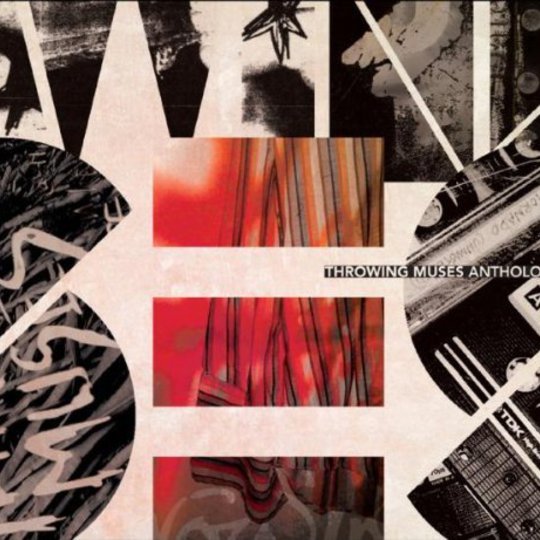 For those who’d forgotten or weren’t in the know, Kristin Hersh’s recent Guardian interview offers a fine reminder of just how awkward both she and her band Throwing Muses can be. That’s not a Thom Yorke-ish weight of the world on her shoulders awkward. Not a Morrissey douchebag awkward. Not Kurt Cobain-style self-loathing. Not simple shyness and not, one suspects, a direct result of her well-documented mental health problems. Rather that from cheerily admitting the band ‘aren’t for everyone’ and that she ‘hates music’ to the often starkly obtuse music itself (which she claims is all aggressively foisted on her whole by her subconscious) , much of her career seems to involve making things needlessly, gloriously difficult for herself.

This is certainly borne out by the tracklisting to Anthology, the first Muses compilation in the band’s 30 year history. With songs picked whimsically rather than prosaically, the 43-song set packs in just one track from breakthrough album The Real Ramona, THREE from the four track Chains Changed EP, some hilariously wilful rarities and nothing written or sung by Hersh’s half-sister and erstwhile bandmate Tanya Donnelly. I’m not at all convinced you can make sense of this band, but let’s at least try and vaguely rationalise Anthology.

What do we actually have here? An awful lot of music, is the answer, much of it astonishing.

Despite only including one of the band’s singles (‘Bright Yellow Gun') the first disc is the more conventional best of, with everything on bar early single 'Fish' taken from the band's albums and EPs. Starting at the chronological beginning is possibly a bad idea when Anthology does no such thing, but Untitled, the Muses’ debut album, is a truly unique artefact and the two tracks that represent it here – ‘Hate My Way’ and ‘Vicky’s Box’ – are soul-freezingly powerful stand-outs. Ragged, agonised, structurally dizzying yet terrifyingly assured, it almost beggars belief that this stuff was written by a human, let alone a teenager. ‘Vicky’s Box’, in particular sounds like almost nothing else, the blurrily beautiful metallic guitar figure of its opening section glistening and reflecting the brutal, mantric lyric “he, can’t ride in cars anymore, reminds him of blowjobs, that he’s a queer”. That opening section descends into a claustrophobic, uncertain collapse that Hersh finally vaporises with her bellowed “WELCOME HOME”, giving way to the song’s incandescent final third ("I only love pieces of things that I hate"). Fuck knows what it – or most of the songs on Untitled - actually mean but there if there is a purer recorded expression of the brute power of a damaged mind, I’ve not heard it.

It seems profoundly unlikely that anybody could have carried on making records like that, but if the Untitled songs feel like the purest expression of Hersh’s troubles, Anthology certainly favours the Muses’ harsher, darker side over the kookier Hunkpapa and The Real Ramona material. So we’ve got the distant, unnerving farewell to emotion of ‘Colder’, the cryptic howling of ‘Marriage Tree’ the pummelling thrash of ‘Flying’, the imperious wall of sound and emotion that is ‘Furious’. That said the band’s poppier inclinations are nodded to with the enjoyable grunge-pop of ‘Bright Yellow Gun’ and the sherbet fizz despair of ‘Cry Baby Cry’ (“I’m not ever getting out, I’m always getting sicker”). Certain omissions feel obtuse, but disc one affords an introduction to the band that is oblique but of quality, and reflective of the live sets they’ve played since emerging from semi-retirement.

The only real bum note is the Donnelly-authored material – true, she didn’t write many, but the likes of ‘Phoenix’, ‘Pools in Eyes’ and ‘Not Too Soon’ are pretty iconic and given how integral she was to the band, it's hard to escape the nagging feeling she's been airbrushed out. Yet Hersh has never seemed like one for sour grapes, and certainly leaving out her own ‘Dizzy’ and ‘Counting Backwards’ are as perverse as any decisions here, so let’s just move on.

The second CD is more of a straight up rarities set, and in that regard it’s actually considerably more comprehensive than the first disc, rounding up near enough all the band’s b-sides, covers, instrumental, etcetera. That does make for some oddities across Anthology as a whole – two versions of ‘Tar Kisses’ and the inclusion of a so-so cover of the Beatles’ ‘Cry Baby Cry’ (presumably only ever recorded because the Muses had a song of the same name). But actually this second disc is a very well rounded set that may lack moments of actual transcendent brilliance a la the best of disc one (though nervy ‘lost’ track ‘Hillbilly’ comes very close, as do ‘Cottonmouth’, ‘Snailhead’ and ‘City of the Dead’) but flows together well, showing a softer and more expansive side to the band after the harsh first disc. Despite her aversion to hooks, Hersh has always been a phenomenal guitarist and many of the rarities underscore that ferociously well (notably the punked up Zeppelin-isms of ‘City of the Dead’ and ‘Manic Depression’). Only available with Anthology’s limited edition, it’s most obviously aimed at fans who already own the rest of the Muses back catalogue, but it seems fairly inconceivable that newbies will hate it if they enjoyed the first disc.

So what does Anthology tell us about Throwing Muses? Awkward. Dissonant. Dark. Damaged. Playful. Oblique. Heavy. Often brilliant. All those things are most certainly true. Still, I’m not convinced it's a better introduction to the band than In A Doghouse or The Real Ramona or the thousands of more conventional mixtapes fans have made over the years (indeed, here’s one I did in 2009). But if Anthology is a showcase for the band’s obtuseness as much as their brilliance, then that feels wholly appropriate.