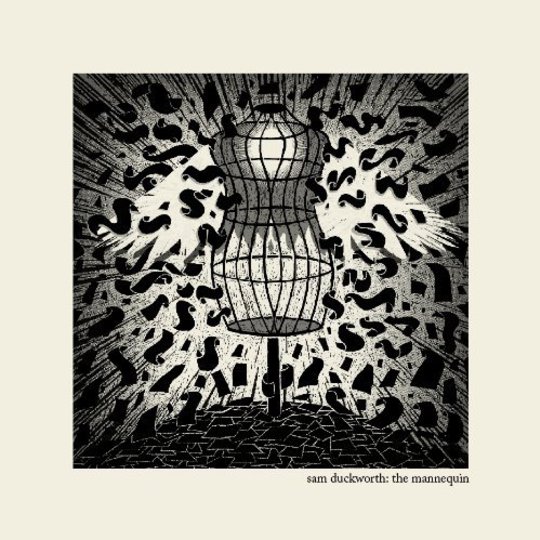 The idea of Sam Duckworth making an album under his own name is a bit confusing. The project he’s best known for, Get Cape. Wear Cape. Fly started out with Duckworth touring the country alone, armed only with an acoustic guitar and a laptop full of processed beats. He said he chose the unusual stage-name for his one-man band to avoid being lumped in with the typical whitewash of dull singer-songwriters, and soon found himself with singles in the top 40 as the poster-boy for right on, acoustic guitar-wielding troubadours. So why go back on that now?

Well, The Mannequin is a very different album. Duckworth has abandoned his alter ego, left the band he’s assembled over the years to their own devices, and even ditched the laptop. As a result The Mannequin is a remarkably stripped down record from a musician who has always used electronic samples and brass to make himself distinct from your typical open mic night douchebag. Now, without Get Cape’s USP, isn’t Sam Duckworth going to sound like a douchebag too?

Well, sometimes yes. But on the whole he sounds smarter, more articulate, and actually more relaxed that he’s sounded for some time. On his last Get Cape release (last year’s self-titled album) the things that once gave his songs character were starting to sound like over-produced gimmicks – a problem best characterised by a puzzling collaboration with Shy FX.

The Mannequin is nowhere near as glossy, and far less stomach-churning as a result. Instead of pitch-perfect melodies and loud chords designed to be strummed at music festivals, these songs are full of muffled finger-picking in the lo-fi style of a tear-jerking early Bob Dylan. ‘Crane Song (The Wall)’ is full of lovely scratches as Duckworth’s fingers glide across his fretboard. He sings as though he’s in a cave, up to his eyeballs in reverb. He sounds distant and thoughtful instead of in-your-face and over-sentimental, bringing the song to a close with a grungy chord pattern that sounds cold and cutting when it could have easily been a clumsy attempt at sounding anthemic.

The gorgeous ‘Clementine’ is just as effective, as Duckworth turns an icy electric guitar part into a melting lullaby that would soothe a grizzly bear with a hangover into a sobbing slumber. On the darker side of things, he even starts to sound a little like Warpaint on ‘Nights’, with a chilling flicker of guitar, some shuddering detuned chords and three particularly ominous piano keys. It all suggests that Duckworth is realising that sometimes less really is more, and that songs don’t have to sound big to be bold and brilliant.

There are some slip-ups. ‘18 To 1’ for example, pays a clichéd tribute to someone who will “always be 18 to me” and who had “the eyes of James Dean”, while the hookless ‘The Farmer’ is plainly uninteresting. Viewed in its entirety though, The Mannequin goes some way to making up for the disappointment of last year’s Get Cape album. On that record, Duckworth pushed himself in directions that didn’t suit him. There were attempts at club bangers, world music and youth anthems, and it all tended to sound a bit naff. Something didn’t fit. But on The Mannequin, stripped of his stage name, Sam Duckworth is starting to sound like his mature, intelligent self again.