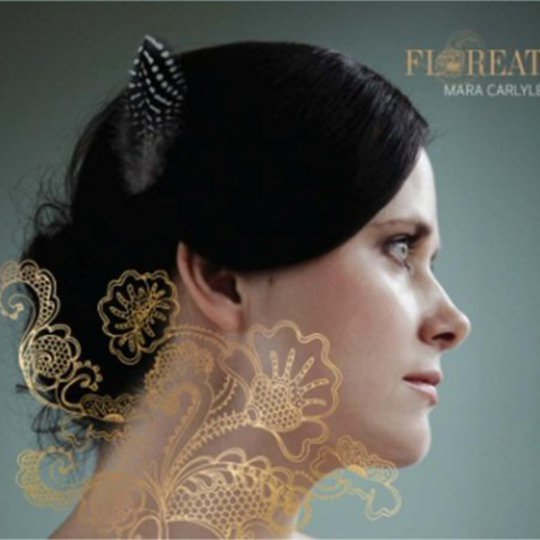 Seven years is a long time; over two thousand five hundred days at last count. Seven years ago Michelle McManus was at number one, the Hutton enquiry was just kicking off and the England cricket team hadn’t even begun to think about climbing the ICC rankings. And seven years ago Mara Carlyle released her debut, The Lovely. Whilst it wasn’t a sufficiently seismic event to make it onto Wikipedia’s notable events of the year, it was a well-received record that sat alongside a clutch of strong female singer-songwriter releases, amongst them the likes of Joanna Newsome’s The Milk-Eyed Mender. It’s fair to say that Carlyle’s subsequent career has been less stratospheric than many of her peers, a fact that seems to be a result of a restrained output and the implosion of the music industry (Floreat, Mara’s second full length was scheduled for release in 2008 but shelved after EMI was bought out). Indeed, the frustrations and wrangling were sufficient for Mara to consider leaving the industry altogether; as it turns out her decision to stick with it is our gain; her second full length is a compelling pleasure that rewards additional listens.

For those that remember The Lovely, you can shelve any fears that the last seven years have seen Mara experimenting with vocoders, Norwegian death metal or samples of cats purring; many of the elements that made her debut so charming (mellifluous vocals, complex yet not overly complicated arrangements and the embracing of multiple genres) are still in evidence here. Admittedly there is a cat purring but what’s not to like about that? The key difference between The Lovely and Floreat is that where previously tracks meandered and noodled, occasionally dropping into a kind of Solveig Slettahjell-lite, there is now more structure, confidence, and substance. Production qualities are also markedly higher thanks to the helping the hand of Dan Carey (Hot Chip and La Roux) as opposed to Steve Jobs (The Lovely was apparently largely cobbled to together on a Mac), along with a richness of sound derived in part from working with the Royal Philharmonic Orchestra.

The listener is put on the back foot from the off, as a nondescript and vaguely threatening pulse crescendos and develops into an emboldening string-led chord, quickly cut and replaced by a more familiar syncopated jazz break and Carlyle’s multi-tracked vocals. It’s an effective trick and one that defines the record without feeling self-indulgent: from the playful and whimsical to the sensual via the odd Gregorian chant, individual songs and styles exist independently whilst the album remains tied together by recurrent eccentricities and Mara’s often complex vocal arrangements. If all this sounds terribly earnest there’s playfulness too, evidenced by Mara’s request “Don’t let these little fuckers steal your sparkle, you dug in mines for that” in ‘Pearl’, or the bizarre animal similes heard in the charming and sensual ‘Nuzzle’. The latter is a highlight, along with ‘The Devil In Me’, the album’s closer, a track that features some beautiful harmonies, textured instrumentation and a degree of pop sensibility that often felt absent from The Lovely.

Despite the warm critical acclaim that accompanied her debut, after a seven year absence it’s fair to say that Mara is probably best known not for her previous full length, but as a result of the recent use of ‘Pianni’ on Mother’s cat advert for IKEA; a decent ad, an effective use of her music and no doubt a warm welcome for the bank balance. That’s not to say Floreat bears the hallmarks of a slightly cynical synch-friendly release, rather it seems a genuine labour of love; even the album’s title was changed from Nuzzle to Floreat, Latin for ‘let it flourish’ or ‘let it bloom’. Whether it does or not, it’s a more than respectable artefact, seven year gap or otherwise.