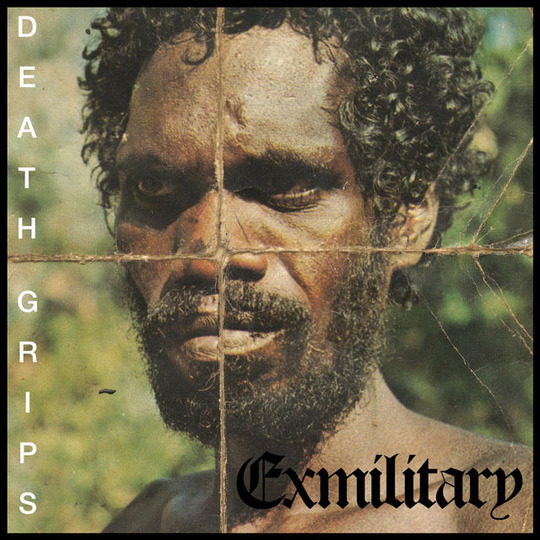 According to Ex Military, war is hell, or at least Sacramento is. For Californians Death Grips, living in inner city America is a guerilla run'n'gun affair and its five members, led by founder Flatlander, drummer Zach Hill and the redoubtable MC Ride, are nothing if not combative. On this mixtape the quintet portray the state capital as both a fenced-in complex and a psycho-geographical battleground, with the emphasis on psycho. As MC Ride told The Quietus recently, 'what some people call "mental illness" can also be seen as a survival mentality to others'. Witness the return of urban angst to hip hop.

The tradition of army metaphors in American music is a healthy one. While TVoTR's 'DLZ' made reference to a militarized zone to describe life under the Bush administration, The Fugees' The Score followed a theme of displacement within an oppressive regime. Now, in a genre that rarely evokes a sense of place, the cold, raw and tense climes of Ex Military makes flesh that notion of the ghetto as a sleek totalitarian police state. Of course, that was almost the reality at the height of post LA riots California, and an idea played on by a host of gangster rappers, not least Ice-T who professed on Home Invasion to having “soldiers on the street willing to die”. The pumped up, ruinous and hi-tech production that forms this quite outrageous album is tuned to the pulse of an inescapable ghetto, a quarter-mile Hades characterized by vibrancy but governed by dog-eat-dog turmoil. Over which arches a glut of megalithic psyche-rock samples and the interior monologue of a megalomaniac with a mind like a bag of starving rats; the ghost of a disturbed marine who haunts the songs like an urban spook story. Think DMX meets The Candyman, an enforcer in a post-digital sequel to RZA's spirit-ridden Staten Island.

Beginning with a sample from nightmare angel of American counter-culture, Charles Mansun, the tone is set for something altogether malignant. A bare-bones masterstroke teetering on the brink of collapse, 'Guillotine' strikes much the same note of hallucinatory calm as the Do Lung Bridge scene in Apocalypse Now. Carried on sparse tinny beats and evil bass drops, it's the relative quiet underwriting MC Ride's bizarre ruminations that makes the single such a fresh prospect. Soon comes the quaking power-up sound which breaks over recitation of the title and lights you up like a cattle prod to the temples, before the track again reverts to spartan calm as if nothing happened, making the intervention all the more surreal. That it never quite unfurls to full calamitous pay-off adds to the air of contained insanity, and the track stands in sharp relief to the mayhem that follows. Although never quite as menacing, thereafter the album takes up a punishing momentum unmatched by any record this year.

With its tribal rhythms and militant overtones, the ultra-modern 'Lord Of The Game' sounds like the music African militias might make in 50 years, while the reggeaton-powered 'Thru The Walls' takes Outkast's 'B.O.B' and pulls it backward through a frenzied munitions factory, pitting Hill's ballistic drumming against air-horns, coruscating electronics and Ride at his most kinetic. Built around a riff sample from Black Flag’s 'Rise Above', 'Klink' deploys mallet-to-meat beats and layers of percussion before playing merry hell with the stereo balance on Ride's vocals, giving the impression of not one but three top-bunk psychopaths for your buck. Throughout this middle section the mixed-through tracks together form an intoxicating communique, while the debris-strewn production conjures a bombed-out aftermath. Though not the first hip-hop act to look to industrial for interesting ways of dealing with urban decay, Death Grips do throw the best party.

Elsewhere 'Spread Eagle Cross The Block' (swaggering and clattering) and 'Culture Shock' (slow and serpentine) keep the pressure high until a Pet Shop Boys sample segues into 'Known for It' - cosmic hip hop in the Neptunes vein but distorted by the Californians' bleak vision. They continue apace with 'Blood Creepin', which sports a juke framework corrupted by relentless crunk/punk vocals and a sulphuric climate. Finally, on the relatively more orderly 'I Want I Need It', Ride is able to stretch his legs. Taking centre stage, his oafish, staccato flow resembles that of a jarhead's brainwashed grunts to his drill sergeant, only the dialogue centres on matters of the occult, which by extension makes the drill sergeant, Ride's addressee, the Devil in all this. Then again, apparently the bearded rapper answers to no one. “I am the beast I worship” he announces on opener 'Beware'. Who are we to argue?

Without concession to either individual heroics or hip-hop's signature braggadocio, ego is relegated for a multi-tentacled offensive, its various strands climbing over each other in furious competition. The result is five parts of the one organism, one in service to all, much like a well-oiled army cell. What at first appears to be aggression is actually 100 per cent anguish, and the prevailing sense is that, like Black Flag, every ounce of that angst has been funnelled into edge, bone-crunching rigour and the sculpting of their largely unprecedented style into austere angles. Rotten to its core and coming apart at the seams, this debut lays waste to your nerves before strapping your adrenalised carcass to a runaway freight train. “This game is called survival" sang Joe Strummer “as in heaven, as in hell”. With the hit quotient of a best of compilation, the unflinching Ex Military offers a slice of both. At a price.