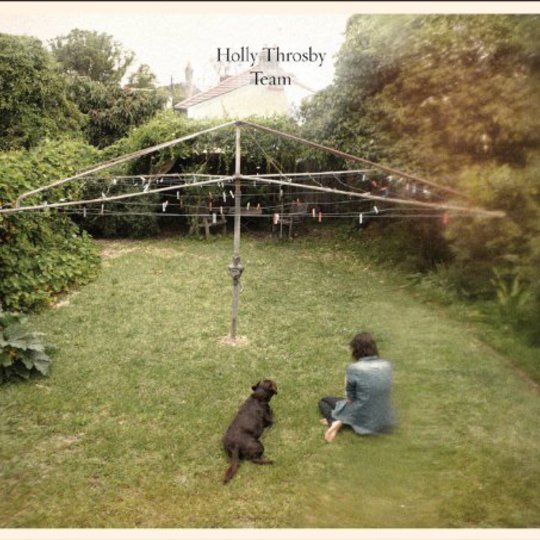 Faced with one of those typical August release schedules that contains nothing by any act you’ve heard of and nobody whose press release suggests you’d have any particular interest in making their acquaintance, I girded up my professional loins and set about pinning the tail on the YouTube donkey. It can’t have been the description of her as a 'singer-songwriter' nor the promise of an album that 'echoes contentment', so it must have been blind good fortune that led me to Holly Throsby’s ‘Here Is My Co-Pilot’ and its attendant video. ‘Co-Pilot’, its triangular guitar parts as reminiscent of the early Go-Betweens as of the folksy/alt. country approach I was expecting, is one of those pop songs so elemental you wonder why nobody’s thought of it before. Like the video, it succeeds in buckets because it’s ingenious in conception but relatively easy to execute. It’s one of the songs of the year, for me, no matter what delights emerge in the next five months. Perhaps of any year. We’ll see. One listen had me sufficiently hooked that if I hadn’t been given the album to review I’d have bought a copy anyway.

Team is Throsby’s fifth outing. Like the only other Throsby product I’ve heard – 2009’s A Loud Call, – it has just the one immediately obvious hit ('A Heart Divided' is the 2009 version, and very fine it is too, although like most things it’s not in the same league as 'Here Is My Co-Pilot') surrounded by slower pieces that take longer to unfold themselves into your consciousness. But where several of the songs on A Loud Call rely on over-familiar country tropes you’d have to search Team long and hard for a I-IV-I-V chord progression or the kind of vocal that tends to accompany it. Perhaps this is because unlike its two predecessors A Loud Call was recorded in the good ole U.S. of A – in holy Nashville itself – with contributions from various alt-luminaries, so maybe Throsby approached it as an experiment in muse-transplantation. She’s a brilliant writer of melodies, even when shackled to a trad blueprint, and neither record is heavy on filler. But Team, recorded back in Throsby’s native Australia, is by some distance the stronger album.

Part of its strength lies in coherence: the songs on Team seem to tell a disjointed story wherein Throsby allows herself to believe for a fleeting moment that she’s found the One – her co-pilot – but, erm, it turns out she’s wrong and the jittery joy ('contentment' is hopelessly off-beam, I’m glad to be able to report) she expresses in the co-pilot song is more than offset by the disillusionment that permeates the rest of the record. Autobiography or not, the lyrics are affecting because the imagery Throsby employs is neither too personal and specific (Joni Mitchell’s motel corridors) nor too self-consciously 'poetic' (just about anything by Laura Marling) to communicate much to the listener except that she is in the presence of a Good Writer, which, let us not mince, is in itself worthless, like one of those people who can play lots of notes very quickly on a guitar. The other part is its musical palette: these are pop songs, and as such it’s in the rules that there are no rules, they can go anywhere they like. Thus, while the arrangements employ much the same ingredients as those on A Loud Call, the strings and (particularly) the subtly-treated backing vocals elevate Team far beyond alt.whatever towards the rarefied atmospheres inhabited by otherworldly beings with names like Kate Bush, Jane Siberry, Joanna Newsome and Mimi Goese.

An attempted malicious YouTube comment on one of Throsby’s songs reads 'I blame Bjork for this kind of thing'. Idiot savant strikes gold or what? Right for all the wrong reasons.