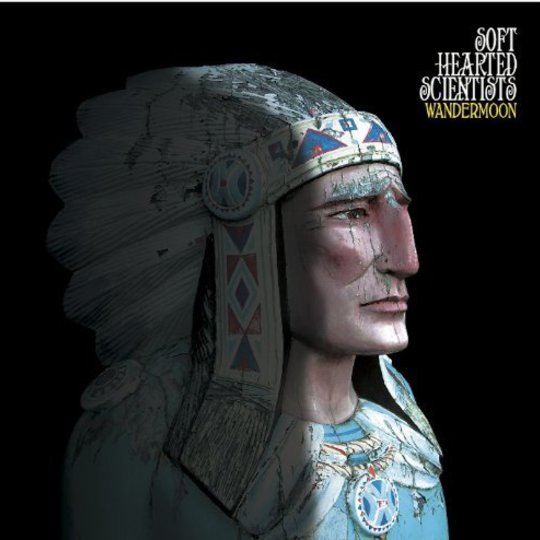 While 2009's stripped down Scarecrow Smile – a collection of 16 demos rather than a proper record – emanated a more down to earth sound than the Welsh quartet Soft Hearted Scientists' usual psychedelic whimsy, Wandermoon is a gravitating pull back to the strange, a record that both stays grounded and rockets off.

Since debut Take Time to Wonder in a Whirling Wind, the inhabitants of singer Nathan Hall’s head have always been a curiosity rotating past the Arctic Monkeys to Syd Barret, Hall’s ability to tackle topics true to home with an abstract sparkle is his strongest trait. Written to protest against the drudgery of normal life, Wandermoon is Hall’s trigger word escapism against all things 'coalition government, Jeremy Kyle and Clarkson.'

‘Tornadoes in Birmingham’ is the most obvious piece of such commentary as Hall narrates: “London and Cardiff will become the new Atlantis’ / Better mutate and grow gills or move to a log cabin.” Admittedly it crashes when compared to the catchy sing-a-long charm of: “The trees don’t seem to know that it’s September / Please don’t tick them off they’ll lose their leaves / Then summer’s emerald kingdom will be crumbling / Then loneliness will be back to haunt my dreams” on ‘The Trees Don’t Seem to Know It’s September’, which flares with the same kaleidoscopic charms as Gorki’s Zygotic Mynci. Theramin-like expansions dazzle into a glaring warble of alien organ whilst the contrasting lilt of ‘Arrival Song’ and mystical ‘Road to Rhayadar’ add a welcome pastoral charm.

There are glimmers of over-indulgence. The Super Furry Animals-esque ‘Westwood Leading’ is the main culprit, as ten minutes of repeated electronic themes leading to limping exit does become tiresome. Despite this, Wandermoon is rich and illuminated in a stellar and quaint personality which ultimately makes the record, and it’s hard not to be lifted into Soft Hearted Scientists' world with them. Though a little over indulgent and farfetched at times, it's decent escapism.