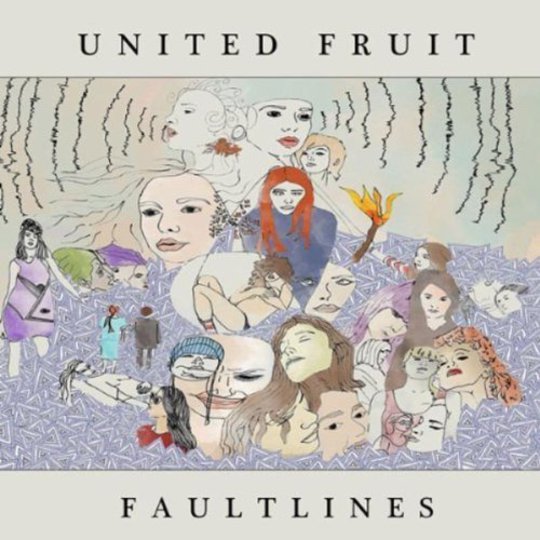 Glaswegian four-piece United Fruit’s debut is some serious trading in all that is heavy, epic and powerfully loud. An album that doesn’t slow down and only occasionally thins out its blanket of distortion, it’s best to be braced when playing Fault Lines.

With such large chunks of distorted rock thrown about, the influences are hard to hide. Trail of the Dead pepper this album with their pin-point timing, the rushing build ups and thunder drum rolls. Similarly My Bloody Valentine make a cameo for The Alarm’s opening guitar riff, but for all the satisfying rip-off-watching there’s an album of original, enthralling thunder.

Opening with 'Kamikaze', the mix of playful thrash and polished guitar pop is welcome. The endless mess of fellow Glaswegians Urusei Yatsura strikes but added guitar layers thicken the song and abrasiveness becomes expansive propulsion. It’s a trait United Fruit use well, each development composed, bringing in new elements and not falling into repetitive process.

'Go Away, Don’t Leave Me Alone' is a song of particular note. It develops continuously for the first half, the chorus “Go away/Leave me alone... don’t leave me alone” is delivered with suitable remorse as knee-jerk aggravation is spotted by the protagonist. As the mid-point of song brings one of the few moments of calm it quickly enters another sprint and sticks on a single, repeating chord. This chord grows, engulfs and unusually doesn’t return into a frenzied assault but lingers and develops a sense of rest. Paradoxically, this serenity is possibly Fault Lines' most powerful moment.

'Three' follows and is a mix of minor chords and sombre verse melodies that again add something larger and more beautiful because of their wider approach. It’s still a three-minute thrash though, a non-stop vocal hook insistently bandied with an instrumental three-chord decay for a chorus. The song precipitates sadness with a comfortingly regular tempo.

If anything tars this, it is hearing influences too brazenly at moments. The vocals come from Alec Empire and Queens Of The Stone Age; McKlusky provide the timing; British Sea Power the shading. But throw it together and United Fruit provide power-squared with a macabre tint threaded through its bluster.

When the band is in full-pelt, which is most of the time, there’s momentum that’s exciting and feels unstoppable. The double explosion of sound is a tense suspension that has to crescendo but is no less thrilling for doing so. Fault Lines is an record of twists and turns at breakneck speed and dangerous volume, there will be few albums as invigorating as this in 2011.