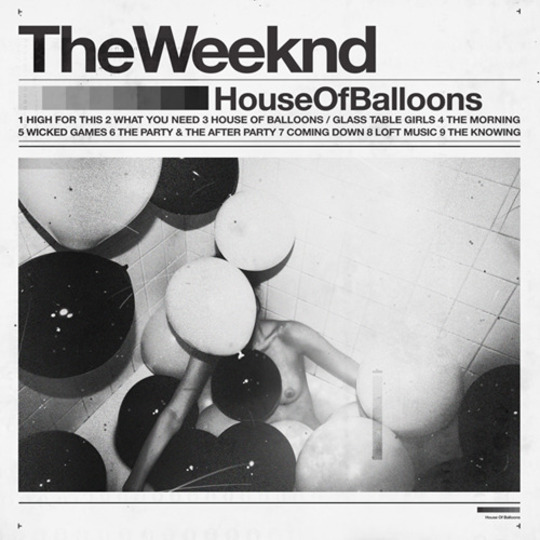 It’s often said that two occurrences are a coincidence but three is a trend; the idea being that the third instance ties the previous two unrelated instances together into something tangible. In the case of what no one is really calling indie R&B, the one group that pulled everything together is Canada’s The Weeknd.

So what is it about this group that has caused so many journalists to shit their pants and throw up so many words about the rise of non-existent genres? Partly, it’s the indie friendly samples (Siouxsie and The Banshees, Beach House). Mostly, it’s the presentation. A modest to scarce internet presence. A Tumblr account, a couple of Twitter posts. No photos whatsoever. It’s a wonder that no one has tried to link them with Wu Lyf in some sort of mysterious guy indie fluff piece. What they did have was a free mixtape entitled House Of Balloons and a cosign from fellow Canadian Drake, which in turn has lead to gushing reviews (this one included) and a nomination for the Polaris Music Prize. Not bad for a free download.

Such was the lack of information available about The Weeknd, it was assumed that House Of Balloons was the work of Drake producer and cohort Noah '40' Shebib. Though this has turned out to be false, it’s no wonder people assumed his involvement. Thank Me Later, Drake’s 2010 debut album, was an introspective and low key affair, at odds with the majority of rap records from last year. House Of Balloons takes this theme and runs with it, developing a whole nocturnal world of woozy atmospherics and syrupy beats, with vocalist Abel Tesfaye’s soulful falsetto cutting through everything like a knife.

Where most R&B groups make songs for the club and the after party, The Weeknd make songs for after the after party; for the clean up or the morning after, if you will. It’s hard to imagine anyone making it rain to any of the songs on here. The closest they get to a banger is the title track ‘House Of Balloons’. Built around a Siouxsie sample, it’s pure, unadulterated R&B pop, and as close to sounding like producer extraordinaire The-Dream that you could want to be without actually being The-Dream. Three minutes in and the song gets chopped and screwed into the far more sleazy ‘Glass Table Girls’. If the first three minutes are for the club, then the next three minutes, and the rest of the album for that matter, are for the lonely night bus ride, the stragglers and the people who refuse to go home. It’s dirty, introspective and intense. Not really watch words for pop music. House Of Balloons is one long comedown, one long tale of too much of everything.

Mostly, The Weeknd spends their time singing about drugs. But rather then celebrating their drug use, The Weeknd address it as something to be ashamed of, something to hide from everyone you’re with. On ‘Loft Music’ Tesfaye asks “What you doing in the bath room/It’s okay, we can do it in the living room” whilst ‘Glass Table Girls’ has him asking if they can “test out the tables”. Assuming they’re not on some 2 Girls, 1 Cup tip, it’s safe to say The Weeknd don’t shy away from addressing their drug use. House Of Balloons is a tale of regretful indulgence, knowing that you’ll feel it in the morning but going through with it anyway.

If you wanted to really examine The Weeknd’s influences, you could easily draw a line from a wide range of genres to House Of Balloons. It’s possible to pick out instances that could come from the more atmospheric end of bass music or the woozy work of DJ Screw. In fact, if you really wanted to, you could probably make a case for that other nongenre, chillwave, influencing this record. In doing so it would be to miss the most important part of House Of Balloons – the songs. For what The Weeknd have produced, regardless of what genre it is or isn’t, is a very good record. Failing to acknowledge the strength of the songs in favour of placing The Weeknd within some false movement would be a disservice to the group. Maybe just accept that you like an R&B album and move on with your life.