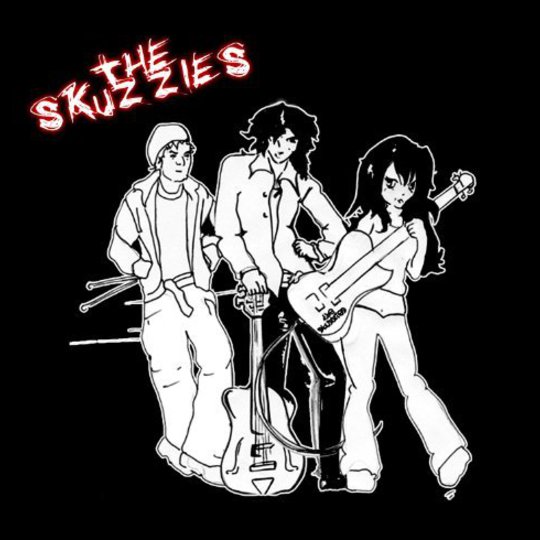 When I were a lad, TV comedy sketch shows had a segment at the end where the actors would do a song that parodied the latest chart trend or hip band. I’m not sure that tradition lasted into the early Noughties, but if it had, then Big Train’s recreation of The Libertines would have sounded exactly like The Skuzzies sound today.

Actually, that doesn’t even do justice to how irrelevant The Skuzzies sound in 2011. To compare them to The Libertines suggests there’s at least an element of poetic romanticism or hedonistic youthful energy in their music. In reality, the The Skuzzies aren’t even as good as a parody of The Libertines. They’re more like a parody of The Paddingtons.

Even their name makes them sound less like an actual band and more like a fictional band that’s woven into the plot of Hollyoaks, and ends up releasing a top ten single in the real world for teenagers to rediscover shame-inducing copies of as they clear out their childhood bedrooms. And their album artwork looks like it was designed by the Channel Five’s ‘yoof tee-vee’ department.

That hypothetical high-selling single would probably sound a lot like ‘Hungry As A Hound’. It features a repetitive, stompy, slapdash riff that they’ve borrowed from The Clash and about a million subsequent bands. It has the benefit of sounding like it was written by a child, making it the perfect song for hundreds of lager-fuelled lads to “duh-duh-duh” along to at festivals as they spill their drinks over the tightly-tee-shirted hipsters who are waiting for Perfume Genius to play afterwards.

A confidently clumsy approach to performance runs throughout The Skuzzies, with its bum notes and calculatedly slurred vocals. In fairness to Pete Doherty, he was wise enough to actually become a drug-addled mess, so that when he started singing like one it at least had an air of authenticity about it. The same can’t be said of Jerome Alexandre, who spends this album either trying to sound like Doherty or trying to not sound like Tim Wheeler from Ash (which he often does, the poor fella). (As an aside, Doherty actually sings a bonus track that comes with The Skuzzies, though it might as well be anyone they found wandering Camden at 5am for how indecipherable it is.)

And unlike Doherty, Alexandre’s lyrics are profoundly lacking in wit or insight. On the Offspring-esque ‘Rich Girls’, for example, he bemoans rich girls who “always turn up their nose” and who “wear converse and fur”. It ain’t exactly ‘Gold Digger’ and manages to paint a borderline-sexist picture of every single town, city and village in the western hemisphere. And that’s not because Alexandre has hit on some perceptive truism about twenty-first century commercialism, but rather because his observations are so uninteresting and formulaic, they’re not even worth making.

The Skuzzies take themselves even more seriously on the pseudo-philosophical ‘The Brompton Principle’. In the verses, the guitar is dripping in a soggy and cheap chorus effect that sounds like it was made for a U2-themed edition of Guitar Hero, while the dull plod of the chorus has all the rhythmic excitement of dry-heaving through a hangover. Add to this some horrendously over-dubbed vocals and you’ve got yourself a piece of music that’s of absolutely no value. The Skuzzies have another crack at being 'deep' as they crawl through their closing track, ‘Heartache Accelerates’. Admittedly this song has a fairly nice PJ Harvey-playing-the-blues vibe to it, but it’s spoilt by Alexandre’s clumsy Bobby Gillespie impersonation and what seems to be the sound of some bloke having a piss in the background.

The Skuzzies sound like the sort of band who are ‘renowned’ amongst themselves and a few of their mates for their ‘infamously raucous’ live show. They’ve apparently tried to capture their energy, ambivalence and ‘don’t give a fuck’ attitude by producing a decidedly unpolished album that in reality just sounds a bit crap. If you’re a Pete Doherty fanatic who’s got a tenner to burn while the little scamp’s in the nick, then this might be the album for you. But if you’re not, don’t even do it as a bet.