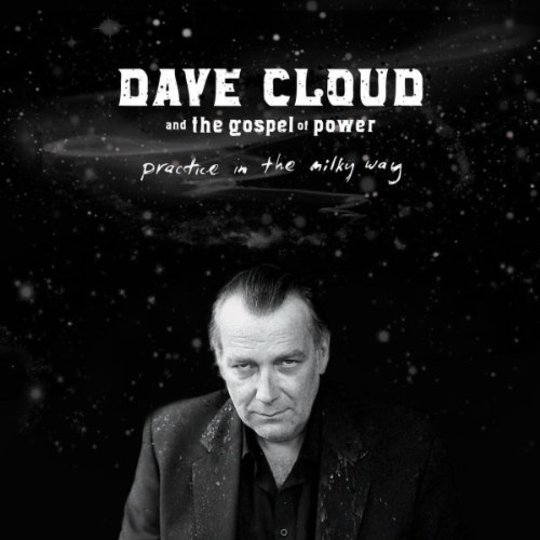 To cater to our big society, built on foundations of pathetic aesthetic rhetoric, I shall cut to the chase. Dave Cloud, the ringmaster at the centre of Dave Cloud & The Gospel of Power, looks like one of those old dishevelled drunks that are somehow coherent enough to catch the last bus, but still adequately inebriated to be oblivious to the pastry and gravy dripping off of their chin whilst they compliment your side-burns for the seventeenth time. Basically, our Dave isn’t going to adorn any teenage girl’s bedroom wall anytime soon. And after listening to his lyrics, I’d assume it’d break the conditions of his parole to be in a teenager’s bedroom anyway – even in poster form. If you like your artists old and horned up then Dave’s your man. Thankfully, while dreams of being a teenage idol dissipate, there is something to cherish. For the grizzled old Sex Pest from Nashville has produced a fantastic record.

Practice In The Milky Way begins shakily with the somewhat unhinged ‘Siberian Hypnotist’. A short spoken word introductory monologue, without any musical accompaniment, that leaves the listener worried that the next 19 songs will also sound like Charles Manson reading his diary aloud.

Then with ‘On The Rebound’ it kicks off. Cloud wailing “Good loving can be found, on the rebound” over raucous, dirty, primitive garage rock. He has a way with words. Not exactly the voice of a generation, but there’s definite potential if he moved into creating slogans for the T-shirt business. “My armpits smell like an Irish flower” being further proof of his unique talent. He comes across as a lunatic, but in an entertaining, 'No you don’t need to call the Social Worker just now', way.

Practice In The Milky Way doesn’t take itself too seriously. The album regularly sounds more like a group of 16-year-olds in a rehearsal room than a proper band. What wins you over is the energy and passion on show.

Maybe you could call it a throwback. It doesn’t exactly break any new ground musically, but unlike the glut of posturing indie heroes it is authentic. Cloud grew up listening to the Sixties and Seventies garage bands first time around, as opposed to commandeering it as a musical vehicle to make a fast buck now that it is back in vogue. Again.

Strangely for an album I enjoy, it makes me laugh. ‘Mrs Crumb’ sounds like something from a cheapo sci-fi film of the Barbarella ilk. A duet with an automated temptress seductively singing “Oh Mr Cloud, I find you raunchy, reckless and reprehensible, on your knees in suffocation”. Yet, amid the belly laughs, it is probably my favourite song on the album. ‘Death In The Wishing Well’ and ‘Eat Me Raw’ are also highlights.

It isn’t all garage rock. ‘Nudist Camp’ inhabits the sexed up funk that Isaac Hayes purveyed, and in doing so accidentally sounds like a song by Flight Of The Conchords. I’m torn, simultaneously nauseous and impressed, when it becomes increasingly evident throughout the course of the record that even in his late Fifties, Mr Cloud has the sexual appetite of a dog in heat.

Titles like ‘Razmatazz’, ‘Sky High On My New Bimbo’, ‘Nudist Camp’, ‘Spanky Spank’ and ‘Party, Party, Party’ don’t fill you up with much hope for the ensuing song, but remarkably they prevail.

Nearly everything about this album is wrong. The track-listing will put off most people. The fact the band name conjures images of a Christian Rock group may also be a deterrent. The rough and ready production, the lyrics, the font, there are so many scabs to pick at. They say two wrongs don’t make a right, yet it seems 20 wrongs do make a right.

If you don’t love this album, you’ll probably hate it.